GameStop Corp.’s meteoric rally this year as one of the first meme-stock icons may be losing steam after the company said it planned to sell more shares and offered few details about its turnaround strategy.

The Grapevine, Texas-based video-game retailer fell 27 per cent to US$220.39 on Thursday in the biggest drop since March 24. The stock, which was among the first to get a huge Reddit and social media following earlier this year, has surged about 1,100 per cent in 2021 as retail investors banded together to take on short sellers and amid optimism on a corporate turnaround.

With the stock about 50 per cent from its intraday record high of US$483, investors are still waiting for a clear strategy from newly appointed chairman and activist investor Ryan Cohen. GameStop did announce a pair of new leaders from Amazon.com Inc. to help with turning the brick-and-mortar chain into an e-commerce powerhouse.

“Investors deserve more than memes to value a company’s fundamental, long-term prospects,” Baird analyst Colin Sebastian wrote in a note. While clearly laying out the groundwork for digital transformation, the board is not ready to disclose details on some challenges, he said. 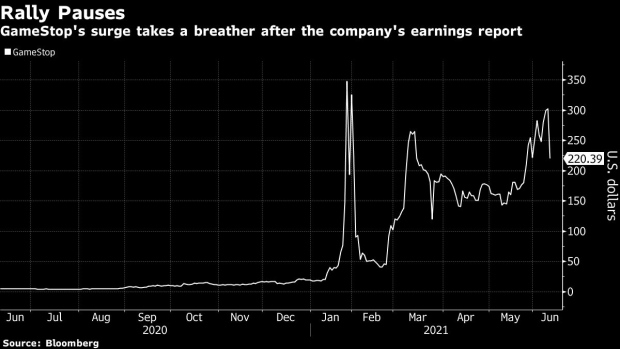 News that GameStop may offer another 5 million shares and that past trading activity is being investigated by the Securities and Exchange Commission is also weighing on its stock.

“The trading probe is definitely a big red flag,” David Trainer, chief executive officer of investment research firm New Constructs, said in an interview. It may be “the needle that can bust the balloon of the stock’s valuation.”

For Wedbush analyst Michael Pachter, the outcome of the probe is unclear and investors may have been more disappointed with the planned share offering. The shelf registration “may have had something to do with” decline following results, Pachter wrote in a note Thursday. Still, he views the potential stock sale as a positive for the company as it would provide more dry powder for acquisitions.

GameStop’s earnings call, which was livestreamed on YouTube and had several thousand viewers, lasted just 11 minutes. Outgoing CEO George Sherman was the only executive who spoke and he declined to take questions from analysts.

Sherman will be replaced on June 21 by Matt Furlong, who led Amazon’s Australian operations. GameStop also hired another Amazon alumnus, Mike Recupero, as chief financial officer. The new recruits are part of Cohen’s broader effort to transform the company into a success story.

GameStop filed for the potential sale of as many as 5 million shares through an at-the-market offering, which allows retail investors to buy in directly. It previously raised US$551 million through an ATM offering in April. The company has otherwise stayed away from selling shares this year, despite calls from analysts to raise equity and a flood of similar deals by fellow meme stocks. The new share sale program announced on Wednesday enables GameStop to raise up to US$1.51 billion, based on the last closing price.

The retailer also reported better-than-expected quarterly sales of US$1.28 billion and a loss that was narrower than predicted.