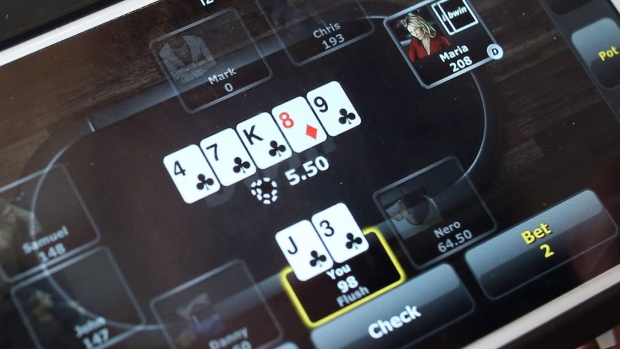 (Bloomberg) -- Gambling firm 888 Holdings Plc is considering tapping credit markets in the near future, after its recent buyout of a rival hindered its ability to generate enough cash to invest in growth.

The company’s debt structure is heavier than anticipated in the wake of its buyout of gaming peer William Hill International, as economic conditions have changed since September 2021 when the acquisition was originally announced, according to a statement issued by the company on Tuesday. Floating-rate securities make up about 64% of 888’s gross debt load, which means the interest it pays on those securities have risen this year because of central bank hikes.

The company didn’t say what sort of debt it was considering selling, but it scheduled a capital-markets day that begins at 2 p.m. London time. It plans to repay £347 million ($417 million) of bank loans it drew down to settle the old bonds issued by William Hill before the acquisition, according to the statement.

Investors are starting to fret about spiraling interest bills for highly leveraged firms amid an increasingly gloomy economic outlook. The concerns are even more pronounced when it comes to companies that issued debt recently and have had to accept a much higher cost of borrowing, which in the case of floating debt, rises as central banks hike rates.

To tackle its debt burden over the medium term, 888 has set out a series of financial targets for 2025, including lowering its adjusted net debt to less than 3.5 times earnings. But raising more debt is likely to prove expensive for 888. Its cost of borrowing could be around 11%, given the yield-to-worst on the company’s 2027 note currently stands at 10.9%.

In July, 888 placed €700 million ($727 million) of bonds with investors at a steep cash discount and with a sky-high yield, as well as a $500 million term loan to finance its acquisition of William Hill.

--With assistance from Ryan Hesketh.