Gap Inc., the apparel retailer that’s searching for a new chief executive officer, said it will no longer seek to establish Old Navy as a standalone company. The shares surged in late trading.

The plan, announced under previous CEO Art Peck, was to spin off Old Navy on the premise that its fast growth wasn’t being reflected in Gap’s stock price. However, Old Navy’s performance has deteriorated in recent quarters and Peck was removed as CEO late last year.

“The work we’ve done to prepare for the spin shone a bright light on operational inefficiencies and areas for improvement,” said Robert Fisher, Gap’s interim CEO. “We have learned a lot and intend to operate Gap Inc. in a more rigorous and transformational manner that empowers our growth brands, Old Navy and Athleta, and appropriately focuses on profitability for Banana Republic and Gap brand.” 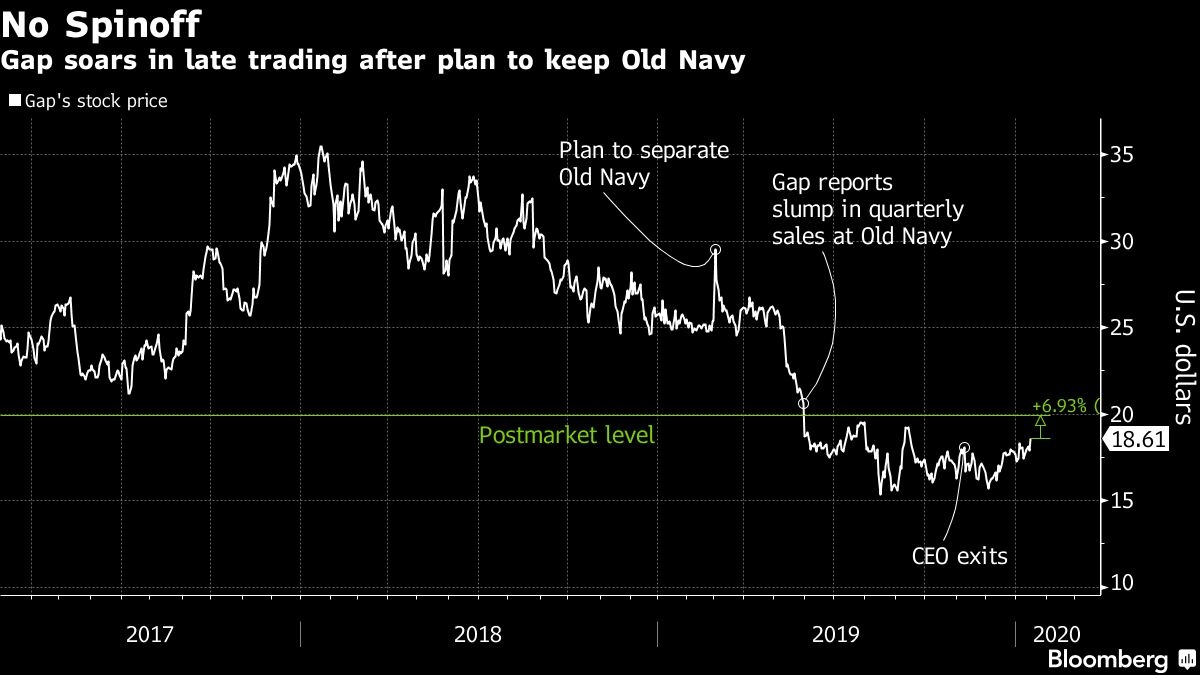 Gap shares jumped as much as 15 per cent in late trading. The company said it expects full 2019 profit to be “moderately above” its previous projection of US$1.70 to US$1.75 a share because of “better than anticipated promotional levels over the holiday period.”

The company also announced that Neil Fiske, president and chief executive officer of Gap brand, will leave the company. Gap has struggled in recent years to find its identity, with several fashion misses and declining sales.

“Gap has lost it’s identity,” said Poonam Goyal, a retail analyst at Bloomberg Intelligence. “It needs to fix operational execution, brand messaging and the entire organization needs an uplift. Who is Gap and who are they trying to attract?”

The decision is a significant shift for Gap. A day after Peck’s departure last November, the company said its board “continues to believe in the strategic rationale for the planned separation, and the preparation for separation continues as planned.”

However, Jefferies analyst Randal Konik had questioned the spinoff in a note this month, asking whether it “continues to make strategic sense” considering its “recently underwhelming results.”

Gap, founded in 1969 in San Francisco, rose to prominence as a denim emporium selling jeans from Levi Strauss & Co., another Bay Area institution. It helped pioneer the vertical integration of retail and started producing its own branded goods. By the 1990s, it had transformed into a fashion juggernaut as it jumped on the khaki-pants trend and built up robust secondary brands in Banana Republic and Old Navy.

But struggles started brewing in the middle of the next decade, from declining mall traffic to operational issues. One of the most famous missteps came in 2010 when the company unveiled a new Gap logo. Some shoppers complained, so it ditched it just a week later.

Goyal said she was “surprised” at Fiske’s departure and the whole company “needs to show a new strategy across their biggest brands.”

Investors may have to wait until Feb. 27 for more details, when the company said it will release fourth-quarter earnings.

“Spin off or no spin off, Gap’s underlying health of the company is still a concern,” Goyal said.

--With assistance from Deena Shanker and Matt Townsend.