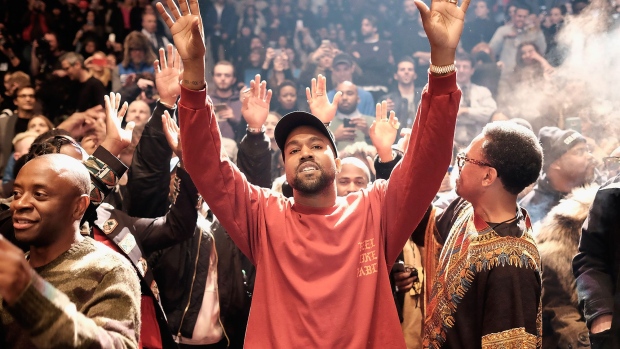 The rapper and designer is teaming with Gap Inc. on a new line of apparel for men, women and kids called Yeezy Gap. Products are expected to debut in stores and online next year, the company said in a statement.

The deal is a multiyear partnership, according to a Yeezy spokesperson. West has been traveling to Gap’s San Francisco headquarters from his ranch in Wyoming to work on the line, which is still in its design phase, the spokesperson said. The line won’t include footwear, a market in which Yeezy already collaborates with Adidas AG.

Gap shares jumped as much as 42 per cent in New York trading on Friday -- the biggest increase since at least 1980. The stock had fallen 43 per cent this year through yesterday’s close.

The arrangement will expose West’s upscale brand to a broader market while letting Gap capitalize on Yeezy’s recent growth. Mark Breitbard, global head of the Gap brand, said in the statement that the new line would build on “the aesthetic and success” of the Yeezy brand.

Gap could use a lift as it grapples with a difficult turnaround effort. In January, it called off a plan to separate its Old Navy brand from the rest of the business. Last quarter, net sales fell 50 per cent as it struggled to cope with prolonged store closures due to the pandemic.

West’s compensation will be tied to sales and his business will earn royalties and potential equity under the terms of the deal. West, who worked at a Gap store as a teenager in Chicago, will also have input on presentation in stores and the e-commerce website.

Last year, Bank of America Corp. valued the sneaker side of the Yeezy’s business alone at as much as US$3 billion, Bloomberg has reported. The shoes are made and distributed by Adidas, while West retains creative control and sole ownership of his brand.

Yeezy’s agreement with Adidas is in place through 2026. The brand was on track to generate US$1.3 billion of shoe revenue in 2019, a 50 per cent increase from a year earlier, according to Bank of America.