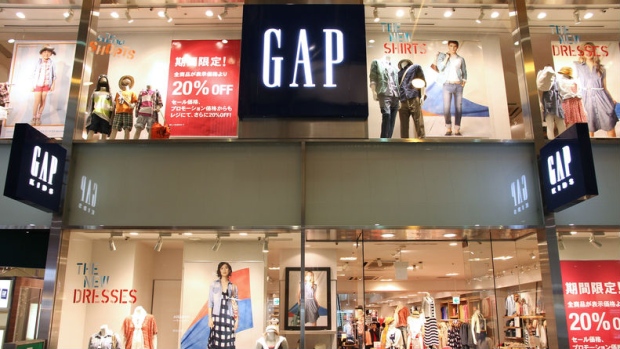 No longer the khaki king of the ’90s, Gap Inc. has been in need of an overhaul for a very long time -- and Art Peck won’t be the one to deliver it after all.

Gap fired its chief executive officer late Thursday after his turnaround efforts failed to reignite sales growth, with disappointing third-quarter performance sending shares plummeting in late trading. The apparel company that includes the namesake Gap brand, Athleta and Banana Republic brought back a member of the founding family to lead the company while it figures out a longer-term plan.

The shares fell 7.2 per cent in early trading before U.S. markets opened Friday. Through Thursday’s close they were down about 30 per cent for the year so far.

Peck’s termination comes after years of struggles at the company. Although the retailer made several public missteps in recent years -- like making blazers without armholes big enough for an average woman and jumping on the regrettable Normcore bandwagon -- many of its problem areas aren’t even unique in today’s difficult retail environment: relying on routine 50 per cent discounts and maintaining a major presence in declining American malls.

“It was probably the most overdue management change that we’ve seen in a while,” said Stacey Widlitz, president of SW Retail Advisors. “There comes a point and time when you can’t sit and do the same thing over and over again.”

After a brief transition, Peck will exit the president and CEO role and vacate his post on the retailer’s board. Robert Fisher, the company’s current nonexecutive chairman and son of Gap co-founders Don and Doris, will step in as president and CEO on an interim basis.

The company declined to comment beyond the press release announcing Peck’s departure. 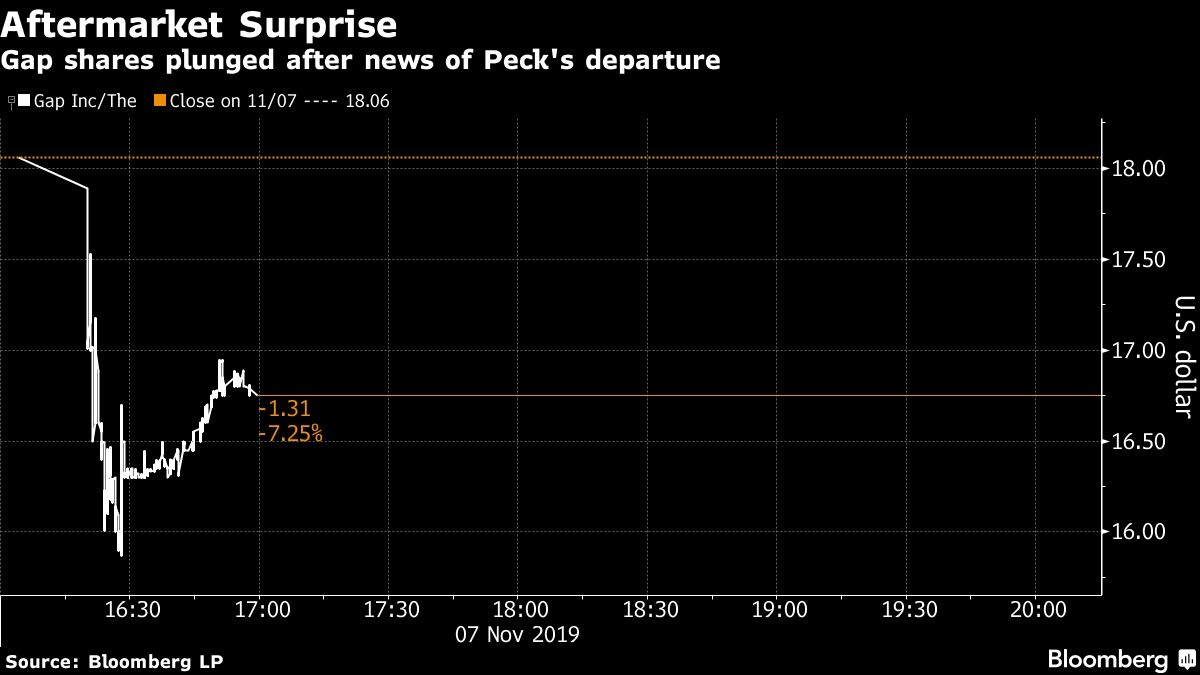 The company said in a statement that companywide comparable sales appeared to be down fpur per cent in the third quarter, which ended Nov. 2, with that measure falling seven per cent at its namesake brand. That’s even worse than analysts surveyed by Consensus Metrix had been expecting.

“This was a challenging quarter, as macro impacts and slower traffic further pressured results that have been hampered by product and operating challenges across key brands,” Teri List-Stoll, executive vice president and chief financial officer, said in the statement announcing Peck’s exit.

The company needs to find a way to sell more goods at full price and figure out a way to capture a new, younger consumer base, Dana Telsey, CEO of Telsey Advisory Group, said on Bloomberg Television.

“If you don’t have the right product, you aren’t able to sell goods at full price,” Telsey said. “There’s work to be done on the core product.”

Peck will be eligible for severance pay based on his termination without cause, the company said in a filing. He’ll get US$2.33 million severance and a payout of stock awards worth several million dollars, filings show. He’ll also be entitled to health benefits and financial counseling for 18 months.

Gap, founded in 1969 in San Francisco, rose to prominence as a denim emporium selling jeans from Levi Strauss & Co., another Bay Area institution. It helped pioneer the vertical integration of retail and started producing its own branded goods. By the 1990s, it had transformed into a fashion juggernaut as it jumped on the khaki-pants trend and built up robust secondary brands in Banana Republic and Old Navy.

But struggles started brewing in the middle of the next decade, from declining mall traffic to operational issues. One of the most famous missteps came in 2010 when the company unveiled a new Gap logo. Some shoppers complained, so it ditched it just a week later.

To try to turn things around, it turned to new CEO Glenn Murphy in 2007, who came from a drugstore chain. He closed a slew of U.S. stores, while expanding overseas and invested in the supply chain. But the recession hit shortly after and thwarted momentum by turning a generation of shoppers onto discounters. Low-priced fast-fashion chains, like Zara and Forever 21, captured the attention of millennials, pushing Gap further out of favour. After a decade at the company in various roles, Peck replaced Murphy in early 2015 as part of a succession plan.

Peck, a former consultant, tried shaking up leadership and experimenting. But sales kept declining and the business declined to the point that the company decided to spin off Old Navy, its best-performing division and the motor for the company’s sales in recent years. The company didn’t even attach an official name to its new venture when it announced the separation in February -- instead referring to it as NewCo.

Old Navy, which had anchored its parent company for years, was given to Sonia Syngal to shepherd. Peck was left saddled with Banana Republic, mired in a sales slump, and the aging namesake Gap brand. He’s tried to position the Athleta chain -- a Lululemon competitor -- as the bright spot within the portfolio he would run, but it hasn’t been enough to turn things around.

“Gap is a company that clearly needed a change. Peck wasn’t moving the needle, except moving it backwards,” said Craig Johnson, president of retail researcher firm Customer Growth Partners. “It’s still a company that has great brand equity, but its residual brand equity that needs to be updated.”

“Gap’s next CEO will need to find a better way to connect with younger shoppers through product, marketing and digital.”

Still, while sales have been poor, the market didn’t see his departure coming, at least so close to the critical holiday period. Peck was well established as the face of Gap. In September, he and Old Navy chief Syngal hosted an event for analysts about the planned spinoff and their vision for the companies’ future. Peck spoke at length about how Gap had to broaden its appeal, including with larger sizes and more diversity.

Despite the holidays being a make-or-break time in retail, Peck’s departure might actually be a good turning point for the company, Widlitz said, adding that merchandise and products have already been decided for this season.

“It leaves the door open for ‘no matter how bad December is, let’s think about the future,’” she said.