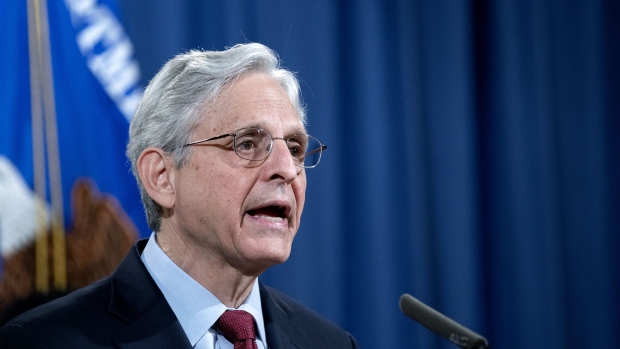 Merrick Garland, U.S. attorney general, speaks during a news conference at the Department of Justice in Washington, D.C., U.S., on Friday, June 25, 2021. The Justice Department is filing a lawsuit against a sweeping new Republican-backed voting law in Georgia that critics say represents intentional discrimination and is unconstitutional. , Bloomberg

(Bloomberg) -- U.S. Attorney General Merrick B. Garland shared new guidelines that clarify when the White House can turn to the the Justice Department for legal advice in a memo to agency staff on Wednesday.

The guidelines, developed in consultation with President Joe Biden’s legal counsel, would ensure the agency’s enforcement decisions and legal work are free from “partisan or other inappropriate influences,” according to Garland’s memo.

Former President Donald Trump has been criticized for interfering in the agency’s operations, pressuring prosecutors to go after his political enemies and lambasting them for pursuing cases against his friends. Trump’s attorney general William Barr was accused by critics of abusing his power to support the Trump administration’s political moves.

Garland didn’t mention those criticisms in his memo.

The new guidelines, which according to the memo supersede all previous memoranda, list the areas when the agency can communicate with White House personnel, including communications over national security issues, such as counterterrorism and espionage.

But the attorney general makes it clear that criminal and civil investigations are off limits, and the Justice Department won’t advise the White House about those “unless doing so is important for the performance of the president’s duties.”

When it comes to hiring, decisions must be made without regard to the applicant’s partisan affiliation, Garland said.

Regarding procurement and grantmaking, the White House can chime in on policies and priorities but awarding contracts and grants is “subject to the norm of independence in decision-making,” Garland said in the memo.

The agency’s success rests on the trust of the American people,” Garland said in the memo. “That trust must be earned every day. And we can do so only through our adherence to the longstanding Departmental norms of independence from inappropriate influences, the principled exercise of discretion, and the treatment of like cases alike.”