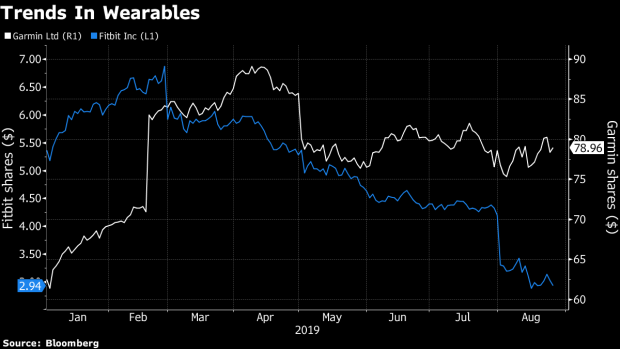 (Bloomberg) -- If you want to stay ahead of Apple Inc. and its wearable accessories, you’ve got to sell to everyone from anglers to military pilots.

That’s the message from the chief executive officer of GPS and fitness accessory maker Garmin Ltd., whose shares have soared more than 25% since January, while rival Fitbit Inc.’s shares have tumbled to record depths.

“The products that win are those that can differentiate themselves from the masses,” Clifton A. Pemble said in an interview. Garmin’s wearables, which range from around $70 to as much as $1,500 in price, are geared to helping athletes monitor activity and health.

Schaffhausen, Switzerland-based Garmin has been selling wearable activity trackers since 2003, and they’ve never needed to be paired with a specific model of phone to function. Watches like the Garmin Forerunner help an athlete determine if they’re overtraining or undertraining, monitor running gait and sleep patterns at night, as well as play music and display messages.

Products like the Apple Watch, on the other hand, were originally marketed as mass-market luxury accessories that exclusively require an iPhone to be useful.

This is changing, however. While fitness features were always an important aspect of the Apple Watch, the company’s become more bullish about its wearable as a standalone health tool. The latest model can already perform mobile electrocardiography and detect potential heart conditions, and in June Apple said it would soon get its own app store and that many more apps would work without an iPhone nearby.

But despite this growing competition, Garmin boosted its full-year guidance in July, saying it now expects around $3.6 billion in revenue, up from $3.5 billion in February, and its fitness and outdoor units are still expected to grow a combined 23% this year.

Its CEO has pegged the success of its wearables on incorporating features overlooked by other manufacturers, while one analyst says the company’s expertise in other areas -- such as flight displays and touchscreen monitors for military fighter jets -- bolsters the capabilities of its other gadgets.

Winning the wearables market could prove lucrative as it’s slated to reach global shipments of 222.9 million units in 2019. That will grow to 302.3 million units in 2023, according to a forecast published in June from the International Data Corporation’s Worldwide Quarterly Wearable Device Tracker.

To contact the reporter on this story: Natalia Drozdiak in Brussels at ndrozdiak1@bloomberg.net

To contact the editors responsible for this story: Giles Turner at gturner35@bloomberg.net, Nate Lanxon