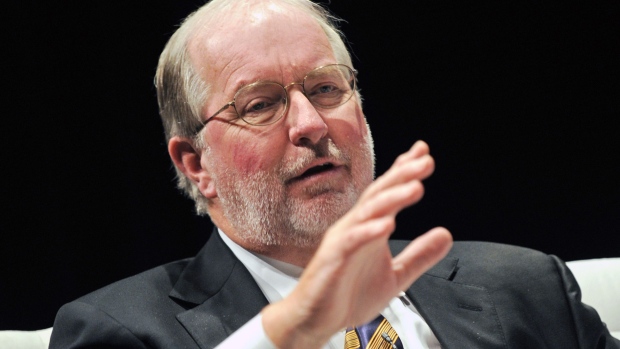 Dennis Gartman, economist and author of the Gartman Letter, speaks at the Bloomberg Hedge Funds Summit in New York, U.S., on Thursday, Dec. 1, 2011. The conference covers the impact of the European debt crisis on the global markets, breaks down the fundamentals driving volatility in the equity markets, and looks at how investors can scratch beyond the veneer when investing in China. , Bloomberg

(Bloomberg) -- Dennis Gartman is telling prospective dip buyers to sell any rallies in US stocks during a bear market that he dates to the start of the year, and expects to last for many months.

“The bear market started January 5,” the chairman of the University of Akron Endowment told Bloomberg Radio on Monday, referring to a day after the S&P 500 hit an intraday record. “People have to understand that fact, and adjust their trading perspectives and investment perspectives accordingly. Rally selling is the viable strategy.”

Gartman said it’s ‘amusing’ that a debate exists on whether stocks are in a bear market. The S&P 500 temporarily registered a 20% drop on Friday from its most-recent closing high, only to recover slightly from the level that traditionally defines a bear market.

“I’ve always gone under the the notion that anything under 7% is bear-market territory,” he said. “You have to be more defensive once we take things down 7%, and 20% is pretty far down before you start to become bearish.”

He reduced the university endowment’s stock position on Dec. 31, 2021, and put the money into Treasury securities maturing in two, three, four and five years, “which I consider to be essentially cash holdings,” Gartman said.

“I’ve got about 25% cash” in his personal portfolio, said the former publisher of the influential Gartman Letter. “And the only major positions I have are in gold and crude oil and commodities. I’ve had a nice period of time here for myself for the last several weeks, and I’m going to continue.”

His bearish sentiment on financial assets stems from the hawkish regime of interest-rate increases and balance sheet reduction planned by the Federal Reserve in its attempt to rein in the fastest inflation since the 1980s.

Gartman, who has invested in and analyzed commodities markets throughout his decades-long career, said he is bullish on commodities in general except for soybeans.

“You want to own the gold market” as an inflation hedge, Gartman said. “You want to avoid if at all possible cryptocurrencies.”