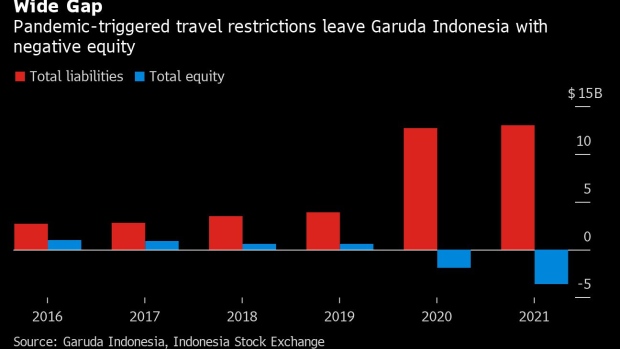 (Bloomberg) -- PT Garuda Indonesia faces a court ruling Thursday on a debt suspension sought by a vendor that would buy it time for a restructuring that is testing how far Indonesia’s government will go to rescue a state-owned company.

Garuda amassed $9.8 billion in debt and judges in a Jakarta court are due to decide on the suspension of debt payments to creditors. The move would to pave the way to slashing liabilities to $3.7 billion and allow the flag carrier to renegotiate terms with aircraft lessors or return planes with the smallest penalties possible.

The petition to suspend payments was made by PT Mitra Buana Koorporindo, an IT company hired by Garuda to procure equipment and manage services. It said the airline owes it 4.2 billion rupiah ($293,000).

Garuda’s fate is of national importance, given its role as a key carrier of people and cargo between 69 destinations in Indonesia, the world’s largest archipelago. The fact that its equity is 60.5% held by Indonesia’s government means parliament would need to approve big corporate changes.

How did it get here?

Even before the pandemic decimated the global airline industry, Garuda had been struggling to stay profitable. The impact of corruption in the procurement of aircraft and engines, aggressive fleet expansion and high costs have contributed to annual net losses since 2017.

Between 2014 and 2019, Garuda’s ratio of aircraft rental costs to revenue was the highest among global airlines, data compiled by Bloomberg show. Last year, as its revenue plunged 67%, the carrier spent nearly 28% of the revenue on fuel, the highest share among full-service carriers in Asia Pacific.

First signs of trouble appeared in early 2020 when Garuda hired advisers to help it stay in business amid concerns that it might not be able to repay interest on a $500 million sukuk. Sukukholders eventually approved a maturity extension of the Sharia-compliant debt securities by three years but Garuda continues to struggle to deliver a distribution payment to investors.

Like other carriers, Garuda is facing multiple lawsuits from aircraft leasing companies. The London Court of International Arbitration ruled that it must settle unpaid aircraft lease rents, as well as other liabilities, to Helice Leasing and Goshawk Aviation.

Why does Garuda need to settle this quickly?

The slump in travel and runaway costs have caused massive cash burn at the carrier. Its average net cash outflow from operations in the first nine months of this year was nearly $64 million a month.

Garuda faces the risk of losing business should global airline traffic recover unless it can reach an agreement with lessors, from which it secures the majority of its fleet. Negotiating individually with a large number of mostly overseas creditors and lessors would take too long.

Drawn out negotiations while air traffic recovers would be a problem for the carrier, which is “why an in-court settlement is the best for us,” Garuda President Director Irfan Setiaputra told a parliamentary hearing on Nov. 9. “An in-court settlement will provide us with certainty as both parties have to sit down and come up with an agreement within 270 days, while the out-of-court process can drag on for longer.”

Investors will keep a close eye on the agreement worked out by Garuda and the creditors if Thursday’s ruling sets in motion a court-mandated restructuring. Investors will also monitor the airline’s strategy to come up with an additional $1 billion to keep it afloat. Government funding would need to be approved by the cabinet and parliament.

The government is now looking at the issue realistically, according to Deputy State-Owned Enterprises Minister Kartika Wirjoatmodjo, who oversees state transport companies. It is even open to the possibility of private investors taking over the company, eroding the state’s majority ownership, Wirjoatmodjo said.