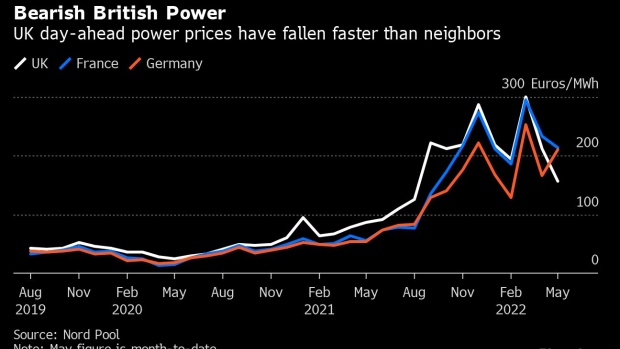 (Bloomberg) -- Britain’s power prices are now among the cheapest in Europe as floods of liquefied natural gas arrive on its shores.

So far in May, the average UK day-ahead price has been lower than in both France and Germany, upsetting a long established price pattern in the region. An unusually high level of LNG has created a glut that’s making it cheaper to run power stations burning the fuel.

After record prices because of the energy crisis, the decline will be welcome news for millions of homes across the nation suffering from the cost of living crisis. The price of everything from energy to food and petrol is rising sharply.

On Wednesday, the UK price was 12% lower than the same day last year, before the global energy crisis had even begun.

All the LNG imports mean that the UK month-ahead gas price is the equivalent of about 59 euros a megawatt-hour, almost half the 95.50 euros that the Dutch benchmark is currently trading at.

The decline in prices will also bring some relief to the nation’s embattled energy supply sector, where half of the firms have gone bust since August because of record volatility. The government said on Tuesday that regulator Ofgem’s price cap -- originally meant to be a temporary measure -- would stay in place beyond 2023.

Still, the price of power is “elevated compared with historic levels and is likely still posing a challenge to unhedged suppliers,” said Sabrina Kernbichler, a power analyst at S&P Global Commodity Insights in London.

U.K. to Extend Cap for Energy Bills to Protect Households

There is a risk that the relief may be limited to the short-term. Longer-term contracts are much pricier as traders weigh supply concerns stemming from Russia’s war in Ukraine and the volatility of the energy transition. The price of power for the first quarter of 2023 has gained more than 6% since the start of May to 234.75 pounds per megawatt-hour on ICE Futures Europe.