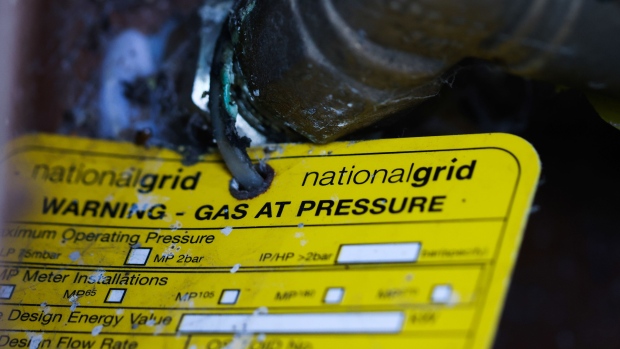 A National Grid Plc warning label on a gas pipe gas outside a customer's home in Danbury, U.K., on Thursday, Oct. 21, 2021.. European energy prices soared to fresh records amid worsening fears over supply, with U.K. natural gas futures exceeding the threshold of 300 pence a therm for the first time ever. Photographer: Chris Ratcliffe/Bloomberg , Bloomberg

(Bloomberg) -- Three grid companies in the U.K. have proposed a 863 million-pound ($1.2 billion) plan to convert the gas network in northeast England to use hydrogen.

Hydrogen could be used to supply 4.4 million households and as many as 39,000 industrial and commercial gas users costing about 13 pounds per household per year, according to a feasibility study for the East Coast Hydrogen project published Tuesday. The project could connect more than 7 gigawatts of production by 2030, exceeding the U.K.’s 5 gigawatt target in a single region.

Hydrogen could be vital to U.K. efforts to eliminate greenhouse gases by changing the way vehicles are fueled, factories are powered and homes are heated. Government analysis suggests hydrogen could have a pivotal role to play, helping to provide as much as 35% of U.K. energy consumption by 2050. The existing gas grid can be converted to transport the fuel from production sites to consumers.

“This is the first step in the conversion of our national gas grid to hydrogen and will act as a blueprint for subsequent conversions across the U.K.,” according to the report. “We will demonstrate the innovation, engineering capabilities and opportunity in the north and create tens of thousands of highly skilled Green jobs in the future hydrogen economy.”

The project aims to repurpose, where possible, the existing gas grid, which is 20% cheaper than building from scratch.