Fuel shortages are expanding across several U.S. states in the East Coast and South as filling stations run dry amid the unprecedented pipeline disruption caused by a criminal hack.

From Tennessee to Florida, convenience stores and corner gas stations are turning away customers as tanks tap out amid panic buying. Even as the White House relaxed some environmental rules to allow gasoline to flow in from other regions, refiners in Texas and Louisiana are curtailing output to cope with logjams of fuel they can’t ship to eastern markets.

Although the shortages have not reached the New York metro area, the premiums demanded for wholesale gasoline and diesel in that market jumped to a two-month high, according to data compiled by Bloomberg.

One Washington D.C.-area fuel distributor warned that “catastrophic” shortages are imminent and called on government officials to order school buses to stay off the roads. Four days into the crisis, Colonial Pipeline Co. has only managed to restart a small segment of the pipeline as a stopgap measure and doesn’t expect to be able to substantially restore service before the weekend.

Beyond that, Colonial has said very little about its next steps, leaving oil refiners and distributors in the dark about what may happen over the next 48 hours. Companies that rely on the pipeline are increasingly frustrated about the lack of transparency, according to a shipper who asked not to be named discussing commercial conversations.

“We have been providing daily and sometimes twice daily updates to our shippers, and have been in close contact with law enforcement and federal agencies to relay information on our restoration efforts,” Colonial’s media relations office said in an email. “We will continue to keep all of our stakeholders informed and appreciate the outpouring of support we have received throughout the industry.”

U.S. average retail gasoline prices have risen to their highest since late 2014 due to the disruption, almost touching US$3 a gallon. That could add to broader inflationary pressures as commodity prices from timber to copper also surge.

Meanwhile, federal transportation regulators took the first step toward waiving rules that prohibit foreign-flagged and -staffed ships from hauling products from one U.S. port to another. Virginia followed North Carolina in declaring a state of emergency.

Total SE and Citgo Petroleum Corp. are among refiners that have reduced fuel production in response to the pipeline shutdown. Others -- including Valero Energy Corp., Phillips 66 and Marathon Petroleum Corp. -- are renting tankers in the Gulf of Mexico to hold excess gasoline and diesel for as long as 40 days, according to people familiar with the matter.

Gasoline isn’t the only oil-derived product under threat. In an effort to bolster jet-fuel inventories, Southwest Airlines Co. has begun flying supplies to Nashville, Tennessee, and other cities. So far, no Southwest flights have been affected by the pipeline closure; rather the airline said it’s “actively managing” fuel stockpiles.

The Colonial pipeline is the most important conduit for distributing gasoline, diesel and jet fuel in the U.S., connecting refineries along the Gulf Coast to population centers from Atlanta to New York and beyond. Each day, it ships about 2.5 million barrels (105 million gallons), an amount that exceeds the entire oil consumption of Germany.

The vital economic lifeline has been shut since late Friday. Without the Colonial system, many cities and airports are forced to seek alternative supplies imported by tanker ships, barges or trucks. Even when the pipeline is restored to full service, it’ll take about two weeks for gasoline stored in Houston to reach East Coast filling stations, according to the most recent schedule sent to shippers.

For diesel and jet fuel, the transit time is even longer -- about 19 days -- because they are heavier and move more slowly.

What BloombergNEF is saying

On Monday, the Federal Bureau of Investigation pointed the finger at a ransomware gang known as DarkSide. While cyberattacks are increasingly used around the world as a weapon against geopolitical rivals, there was no indication that the current crisis could boil over internationally. President Joe Biden stopped short of blaming the Kremlin for the attack, despite some evidence that the hackers or the software they used are “in Russia.”

Russia has no connection to the cyberattack, Kremlin spokesman Dmitry Peskov told reporters on Tuesday.

Federal environmental regulators are waiving rules that bar the sale of conventional gasoline in areas where reformulated fuel is required. They also will permit the sale of gasoline that doesn’t satisfy requirements meant to help combat smog. The waivers apply to Maryland, Virginia, Pennsylvania and Washington, D.C., through May 18.

In New Jersey, closely held Bolkema Fuel Company began topping off its stockpiles as soon as word spread of the Colonial outage.

“There is a panic going out, you know, when you hear something like this,” said Vice President John Bolkema. ”I called in an extra driver and said, just run a few extra loads. Let’s pump up the inventory and wait this out.”

His supplier increased prices at least three times on Monday as other businesses sought to stock up, and Bolkema’s commercial clients are asking for extra deliveries to avoid running low.

Colonial Chief Executive Officer Joe Blount and a top lieutenant assured Deputy Energy Secretary David Turk and state-level officials on Monday that the company has complete operational control of the pipeline and won’t restart shipments until the ransomware has been neutralized.

On Tuesday, Colonial’s website was down because of an issue unrelated to the hack, a spokesman said.

Fuel supplies are dwindling just as the nation’s energy industry was gearing up to meet stronger demand from summer travel. Americans are once again commuting to the office and booking flights after a year of COVID-19 restrictions. Citigroup Inc. said the East Coast is at risk of a “temporary, but major shortage” of fuels due to the Colonial closure.

In the first sign of the potential disruption to air travel, American Airlines Group Inc. said it was adjusting two long-haul routes that originate in Charlotte, North Caroline, to add fuel stops. Flights to Hawaii will call in at Dallas-Forth Worth airport, while London-bound aircraft will make a stop in Boston.

The U.S. East Coast is losing around 1.2 million barrels a day of gasoline supply due to the disruption, according to a note from industry consultant FGE.

In Asheville, North Carolina, Aubrey Clements, a clerk at an Exxon Mobil Corp. station answered the phone with “Hello, I’m currently out of gas.” The Marathon gas station in Elizabethtown had roughly two dozen cars waiting to fuel up, an employee said.

Drivers pulling into a station with a sign offering unleaded gasoline for US$2.649 per gallon in Manning, South Carolina, were met with pumps covered in yellow and red “out of service” bags. 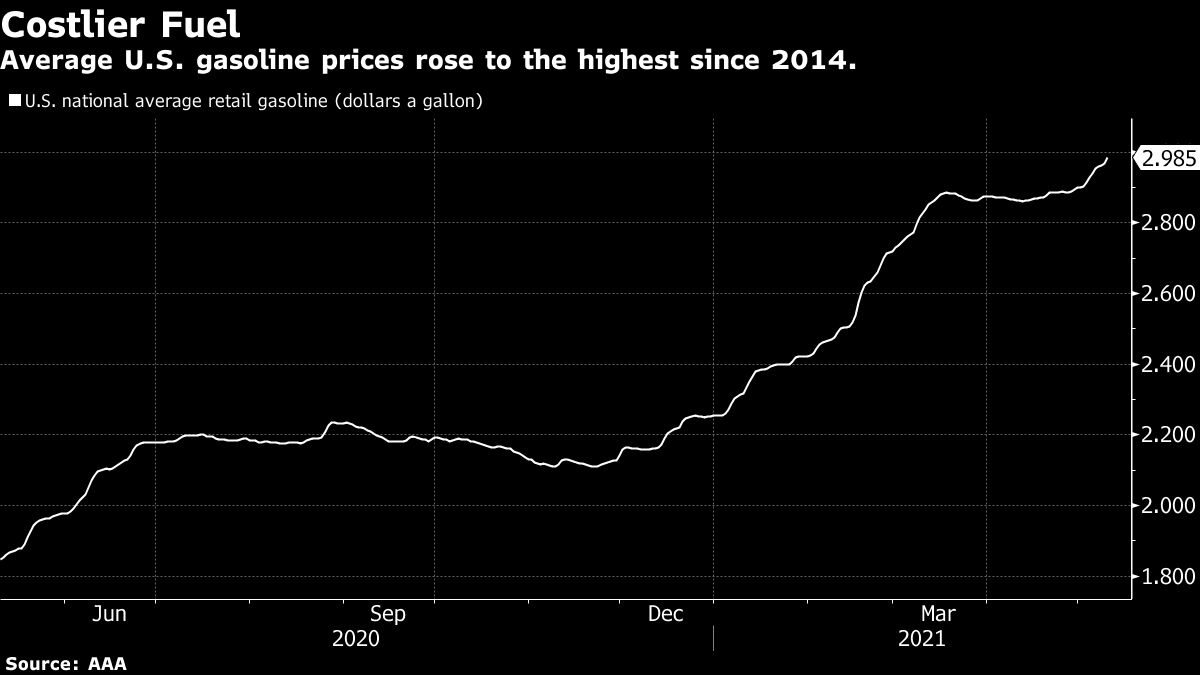 Emergency shipments of gasoline and diesel from Texas are already on the way to Atlanta and other southeastern cities via trucks, and at least two Gulf Coast refineries began trimming output amid expectations that supplies will begin backing up in the nation’s oil-refining nexus.

The national average retail gasoline price rose to US$2.985 a gallon, the highest since November 2014, according to auto club AAA. The premium for wholesale gasoline in the New York area expanded to its widest in three months.

The event is just the latest example of critical infrastructure being targeted by ransomware. Hackers are increasingly attempting to infiltrate essential services such as electric grids and hospitals.

Ransomware cases involve hackers seeding networks with malicious software that encrypts the data and leaves the machines locked until the victims pay the extortion fee. This would be the biggest attack of its kind on a U.S. fuel pipeline.

The Northeast can secure gasoline shipments from Europe but it will come at an increasing cost the longer the pipeline stays shut.

Landlocked cities face the greatest danger of fuel shortages compared with those with access to water-borne deliveries, said Steve Boyd, senior managing director at Houston-based distributor Sun Coast Resources Inc. If the pipeline remains down for many more days, he’s anticipating a “massive surge” in orders.