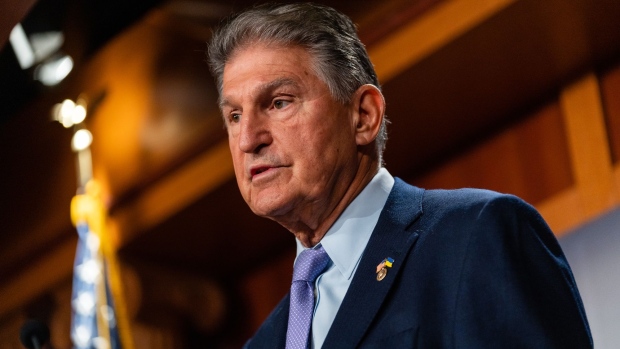 (Bloomberg) -- A US government funding bill was stripped of an effort to speed up the federal approval process for energy projects, dealing a major setback to efforts to fast-track the approval of energy infrastructure including a stalled $6.6 billion natural gas pipeline.

Senate Majority Leader Chuck Schumer said Tuesday he agreed to a request by Senator Joe Manchin to remove permitting reform language from the stopgap government spending bill after it became clear the measure didn’t have the votes needed to advance. In a vote immediately after the decision was announced, the bill had enough support to advance in the Senate.

“It is unfortunate that members of the United States Senate are allowing politics to put the energy security of our nation at risk,” Manchin, a Democrat from West Virginia who had proposed the energy provision, said in a statement. “A failed vote on something as critical as comprehensive permitting reform only serves to embolden leaders like Putin who wish to see America fail.”

Talks on how to advance the measure before the end of the year will continue, Schumer said in remarks on the Senate floor.

Manchin’s proposal would have required federal agencies to approve and issue all permits necessary for the construction of Equitrans Midstream Corp.’s stalled Mountain Valley pipeline within 30 days. Construction on the 303-mile (488-kilometer) conduit, which crosses Manchin’s home state, has been stalled after a federal court in January rejected a permit to cross a national forest following a challenge by environmentalists.

Shares of Equitrans dropped 4.2% in after-market trading in New York.

Manchin’s bill would also have put a two-year time goal on environmental reviews for large energy projects and one year for smaller ones. In addition, the legislation would be allow the president to designate a list of at least 25 “high-priority energy infrastructure projects” for which permitting would be prioritized and expected the approval process for electricity transmission projects for far flung renewable energy projects that benefited from Democrats recently passed climate package.

The bill  received pushback from Republicans, who saw the proposed permitting reform as political payback for the senator’s vote on the spending bill, and from Democrats who said it would roll back key environmental protections. Environmental groups also cheered the withdrawal.

“While the campaign against polluting oil and gas is far from over, this repudiation of Senator Manchin’s so-called permitting reform bill marks a huge victory against dirty energy – and also against dirty backroom Washington dealmaking,” Wenonah Hauter, the executive director of Food & Water Watch said.

(Updates with remarks from environmental group in last paragraph)