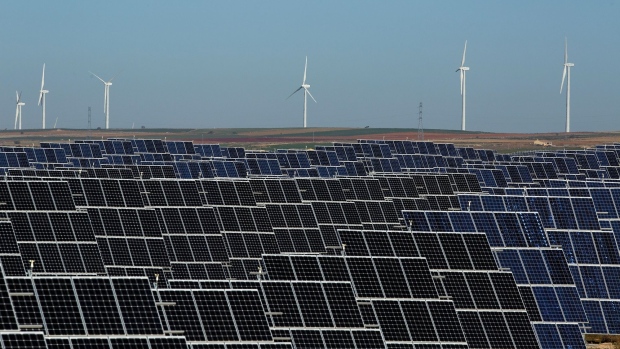 EL BONILLO, SPAIN - DECEMBER 02: Photovoltaic power panels stand at Abaste's El Bonillo Solar Plant while wind turbines spin at a wind farm on the background on December 2, 2015 in El Bonillo, Albacete province, Spain. Spain in 2008 was a leading country on photovoltaic power and renewable energies but after some law changes the solar power industry collapsed, with companies either closing or turning to overseas markets. The UN Climate Change Summit is taking place in Paris over two weeks, in an attempt to agree on an international deal to curb greenhouse gas emissions. (Photo by Pablo Blazquez Dominguez/Getty Images) , Photographer: Pablo Blazquez Dominguez/Getty Images Europe

(Bloomberg) -- Natural gas-fired power plants, which have crushed the economics of coal, are on the path to being undercut themselves by renewable power and big batteries, a study found.

By 2035, it will be more expensive to run 90% of gas plants being proposed in the U.S. than it will be to build new wind and solar farms equipped with storage systems, according to the report Monday from the Rocky Mountain Institute. It will happen so quickly that gas plants now on the drawing boards will become uneconomical before their owners finish paying for them, the study said.

The development would be a dramatic reversal of fortune for gas plants, which 20 years ago supplied less than 20% of electricity in the U.S. Today that share has jumped to 35% as hydraulic fracturing has made natural gas cheap and plentiful, forcing scores of coal plants to close nationwide.

The authors of the study say they analyzed the costs of construction, fuel and anticipated operations for 68 gigawatts of gas plants proposed across the U.S. They compared those costs to building a combination of solar farms, wind plants and battery systems that, together with conservation efforts, could supply the same amount of electricity and keep the grid stable.

As gas plants lose their edge in power markets, the economics of pipelines will suffer, too, RMI said in a separate study Monday. Even lines now in the planning stages could soon be out of the money, the report found.

“Our story for gas plants is, if you build it, they won’t run -- they won’t run at their expected capacity factors,” said Mark Dyson, who co-wrote both reports. “And that filters down to pipelines, too.”

To contact the editors responsible for this story: Lynn Doan at ldoan6@bloomberg.net, Joe Ryan, Pratish Narayanan