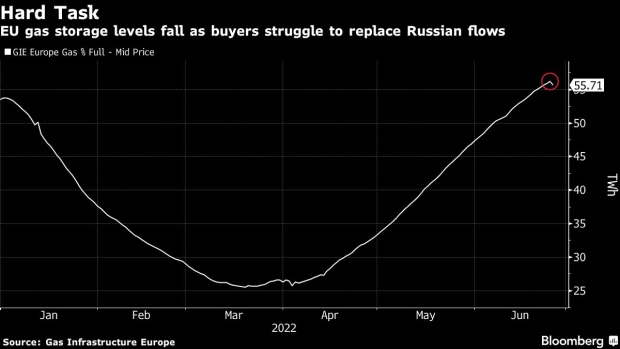 Pipework showing flow direction at the Kasimovskoye underground gas storage facility, operated by Gazprom PJSC, in Kasimov, Russia, on Wednesday, Nov. 17, 2021. Russia signaled it has little appetite for increasing the natural gas it transits through other territories to Europe as the winter heating season gets underway. Photographer: Andrey Rudakov/Bloomberg , Bloomberg

Benchmark futures started the week with a gain of as much as 6.9%. Buyers have found it more difficult to replace Russian gas from elsewhere after its main supplier cut off flows through a major route to Europe by 40% earlier this month. Inventory levels in Europe retreated 1% on Saturday, breaking a run of increases that had taken them toward the 5-year average.

The situation could only worsen with the Nord Stream pipeline -- the biggest link from Russia to the European Union -- scheduled to fully shut for maintenance next month. German Economy Minister Robert Habeck said he can’t be sure that Russia will resume shipments through the link following the works, raising the prospects of a fresh surge in prices and rationing this winter.

Full storages are essential for Europe to get through winter when demand for heating peaks. EU energy ministers will discuss preparedness at a meeting on Monday in Luxembourg, according to diplomats. The European Commission is seeking to present a proposal in July on how the bloc could reduce demand.