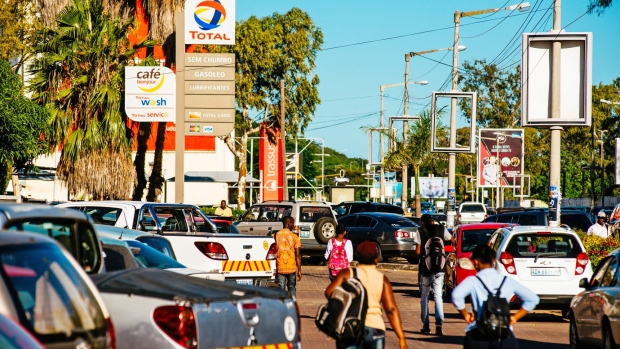 Pedestrians walk past parked vehicles outside a Total SA gas station in Maputo, Mozambique, on Thursday, March 23, 2017. Mozambique missed a $119 million payment due Tuesday on a loan Credit Suisse Group AG arranged, the second debt repayment the government failed to make in as many months. Photographer: Waldo Swiegers/Bloomberg , Bloomberg

(Bloomberg) -- Mozambique and Tanzania are strengthening their relations to fight cross-border terrorism ahead of a regional summit on the insurgency that threatens almost $60 billion of natural gas projects.

Mozambican President Filipe Nyusi traveled to Tanzania to hold talks with his counterpart John Magufuli ahead of a Southern African Development Community meeting next week that will seek to draft a regional response. The bloc failed to come up with specific strategies in successive meetings last year. The two leaders agreed to resume a joint commission on defense and security, Nyusi told reporters Monday on his return.

Insurgents who’ve aligned with Islamic State have since 2017 staged increasingly bold attacks in Mozambique’s Cabo Delgado province that borders southern Tanzania, including occupying a port town in August. More than 500,000 people have fled the violence.

Total SE this month said it started evacuating workers from its $20 billion liquefied natural gas export project, Africa’s biggest private investment yet, as the violence reached its concession area. That’s heightened questions around the government’s response, and what the insecurity means for the project’s future.

Mozambique hopes to reap as much as $96 billion in revenues over the next 25 years from the project and others planned by ExxonMobil Corp. and Eni SpA at a combined cost of about $40 billion.

Relations between Mozambique and Tanzania have been strained, with each blaming the other for the continuing insurgency that’s left nearly 2,500 dead, according to the Armed Conflict Location & Event Data Project, which tracks the violence. The nations’ police chiefs agreed in November to start joint operations to combat the insurgents, who killed more than 300 people in an October attack in southern Tanzania.

The U.S. has joined a growing list of nations offering Mozambique help in containing the insurrection. Anthony Tata, policy undersecretary at the Department of Defense, last week discussed with the southeast African nation’s defense and interior ministers the possibility of providing military training, according to a statement Monday.