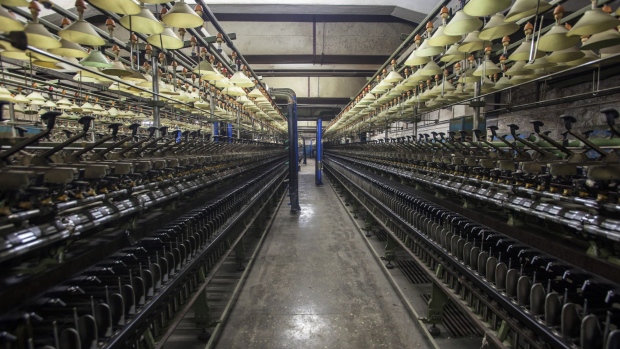 Spinning machines sit in an abandoned textile mill in Karachi, Pakistan, on Monday, Sept. 19, 2016. Exporters from South Asia's second-largest economy, including textile manufacturers who account for more than half of all overseas shipments, say buyers have shifted to countries including Bangladesh and Vietnam as continual power outages impede their ability to meet order deadlines, while complaining that the government has provided scant support. Photographer: Asim Hafeez/Bloomberg , Bloomberg

(Bloomberg) -- Pakistan’s natural gas shortage is hurting its most important export industry, putting even more stress on an economy already struggling with accelerating inflation and a weakening currency.

About $250 million of textiles exports were lost last month after mills in Punjab were forced to shut for 15 days, said Shahid Sattar, executive director of All Pakistan Textile Mills Association. Factories in the province are dependent on regasified imports of liquefied natural gas, while domestic supply is being diverted to other regions, he said.

Pakistan has become a fast-growing import market for LNG as local supply has subsided over the last few years. But competition for the fuel -- used as an electricity feedstock and for heating and cooking -- has intensified due to global shortages, sending spot prices to levels that Pakistan can’t afford.

The textiles industry -- which supplies everything from denim jeans to hats to buyers in the U.S. and Europe -- is one of the country’s few economic bright spots. Production grew almost 6% in the nine months through March 2021 and the sector accounted for 60% of total exports, government data show.

“The high gas prices are prohibitive,” Sattar said in an interview. The “supply shortfall is due to the energy ministry’s inability to arrange supply, and is hurting the very future of Pakistan’s exports and economy.”

The country exported $11.4 billion of textiles in the nine months through March 2021, according to government data. Based on those figures, the $250 million probably amounted to around 20% of Pakistan’s textiles exports last month, according to Bloomberg calculations.

The gas shortage is hitting Pakistan at a critical economic and political juncture. The country is struggling with accelerating inflation and a weakening currency, with support for Prime Minister Imran Khan’s ruling party ebbing ahead of national elections due in 2023. The government also needs to raise taxes, and has just increased petrol price levies, as a pre-condition to resume its $6 billion bailout program with the International Monetary Fund.

Pakistan, which is heading into the coldest months of the year, issued an emergency tender to import more LNG in November after suppliers backed out from deliveries amid skyrocketing prices and surging global demand. More recently, gas trader Gunvor told Pakistan it would be unable to make a delivery scheduled for Jan. 10.

The country faces gas shortages every winter because Pakistan’s natural gas fields are seeing a depletion of about 9% each year and imported LNG is very expensive, Energy Minister Hammad Azhar said at a press briefing in late December. Pakistan announced a bidding round to help find more oil and gas reserves, Azhar said in a Twitter post on Friday.

The government restored gas supplies to the textiles sector last Wednesday, but frequent power blackouts are still curbing operations, Sattar said. Mills will only be able to run at about 80% of capacity if the situation persists, he said.

“Our history is littered with episodes of ‘stop-go’ growth caused by energy shortages and exorbitant costs, both of which are the result of mismanagement” by the government, Sattar said.