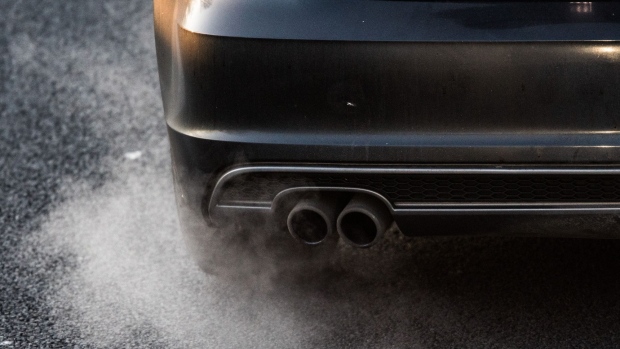 DUESSELDORF, GERMANY - FEBRUARY 22: A car emits exhaust fumes on the A52 on February 22, 2018 in Duesseldorf, Germany. The German Federal Court of Justice (Bundesgerichtshof) in Leipzig is due to rule today whether German cities may impose bans or partial bans on diesel cars in order to bring down emissions levels. While the court is deciding on the measures for Stuttgart and Dusseldorf, the ruling will set an important precedent, especially for Munich, which in 2017 had the highest levels of nitrogen oxides (NO2) of any city in Germany. A total of 70 German cities are struggling to bring down their emissions in order to conform to European Union-mandated levels. (Photo by Lukas Schulze/Getty Images) , Photographer: Lukas Schulze/Getty Images Europe

(Bloomberg) -- Argentina’s Transportadora de Gas del Norte defended the intentional release of methane directly into the atmosphere during planned pipeline work. The cloud of greenhouse gas had the same short-term warming impact as the annual emissions from about 12,000 US cars. A spokesperson for the company, which transports about 40% of the country’s piped fossil gas, said the overall volumes emitted were relatively usual by industry standards and that it was unfair to draw attention to the releases when other fossil-fuel operators routinely leak the potent greenhouse gas. TGN is the latest example of an oil and gas company that may be able to do more to curb methane emissions, a greenhouse gas with 84 times the warming capacity of carbon dioxide during its first two decades in the atmosphere. The International Energy Agency has said these companies must severely curtail or eliminate non-emergency releases of methane to avoid the worst of climate change.

TGN said it released about 600,000 standard cubic meters of gas on May 30 and fewer than 400,000 standard cubic meters on June 6, when 19-mile sections of two separate pipelines were emptied to make them safe for workers to inspect and repair.  Up to 90% of emissions from so-called pipeline blowdowns can be eliminated through techniques like burning the gas through a flare. Read more: The Cheap and Easy Climate Fix That Can Cool the Planet FastThe company said that lowering the pressure of the gas, rather than fully venting it, wasn’t an option because it would have made the work dangerous. The spokesperson said they didn’t know why the gas wasn’t flared. The plumes were also observed by the European Space Agency’s Sentinel-5P satellite. The May 30 release had an estimated emissions rate of 120 metric tons of methane an hour, according to global geo-analytics company Kayrros SAS. The second plume had an estimated rate of 57 tons an hour. TGN said the bigger May 30 release lasted less than two hours.

Methane releases in Argentina observed by satellite have historically been detected around Buenos Aires, where landfills, leaky pipes and livestock facilities are all likely to contribute to severe and sustained plumes. But these two recent clouds were hundreds of miles from the capital, shining a spotlight on another source of the country’s emissions: its vast fossil gas reserves. South America’s second-largest economy is highly dependent on gas, which accounts for 55% of its primary energy mix, according to the International Energy Agency.Read more: Buenos Aires Leads Latin America in Turning Landfill Methane Into PowerA Bloomberg investigation into clouds of methane around Buenos Aires last year identified the Norte III landfill as a prevalent source. The site’s operator, Ceamse, said a new power station running on gas captured and piped from the trash would reduce emissions by about three quarters. There were 34 separate methane plumes detected by Sentinel-5P in and around Buenos Aires last year, according to an analysis by Kayrros. Another 19 have been spotted so far this year. Agriculture accounts for roughly 40% of human-caused methane emissions globally, followed by fossil fuels with 35% and waste with 20%, according to a United Nations report. In Argentina, oil and gas venting or flaring accounts for 6% of all greenhouse gas emissions in the energy sector, according to the government. Cattle herds are large contributors to Argentina’s agricultural emissions.