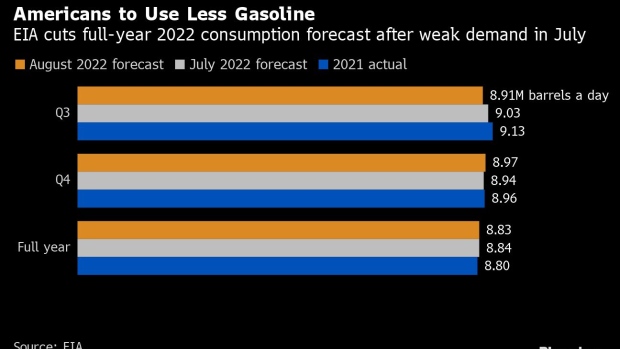 Traffic on Interstate 80 in Crockett, California, US, on Thursday, June 9, 2022. Stratospheric Fuel prices have broken records for at least seven days with the average cost of fuel per gallon hitting $4.96 as of June 8, according to the American Automobile Association. Photographer: David Paul Morris/Bloomberg , Bloomberg

(Bloomberg) -- The US will consume less gasoline this year than previously thought, although total demand will still top 2021 levels, according to the latest government forecast.

Gasoline consumption for 2022 is now forecast at 8.83 million barrels per day, down from a previous forecast of 8.84 million, according to the Energy Information Administration’s Short-Term Energy Outlook released Tuesday. The expected drop is largely due to a 120,000 barrel a day reduction in the third-quarter demand estimate, which more than offsets a forecasted increase in the final quarter of the year.

The revised forecast comes after retail pump prices surged to a record of more than $5 a gallon in early June, causing many Americans to alter their driving habits amid soaring inflation. And while the national average has fallen for 56 straight days, at $4.033 a gallon, that’s still 26% higher than a year ago, according to auto club AAA. Analysts say lower fuel prices alone haven’t been enough to lure drivers back to the roads.

The downward revision in third-quarter demand likely incorporates the slowdown evident in the weekly estimates for July. “Relatively lower gasoline demand compared with 2021” last month helped refill inventories, along with higher refinery utilization, the EIA said in the report.