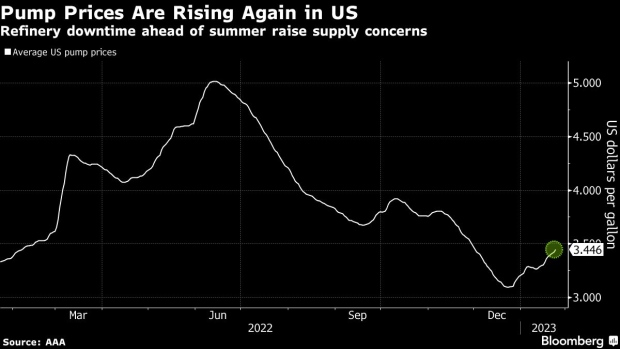 (Bloomberg) -- Gasoline prices in the US are spiking earlier than usual this year, raising concerns that meager inventories and heavy refinery maintenance will combine to cause another costly summer at the pump.

Gasoline averaged $3.446 a gallon on Monday, the highest ever for this time of year, according to auto club AAA. The fuel has risen for 13 straight days, the longest streak of gains since prices hit a record in June.

The surge is coming about a month before refiners’ annual transition to producing more expensive summer grades of fuel typically boosts prices at the pump, raising the possibility that consumers won’t get relief until after the peak driving season. The increase may move gasoline prices even higher up the political agenda in Washington, where the White House already has been using them as a cudgel against GOP-supported bills critical of its energy policy.

Driving the price gain is a heavier-than-usual refinery maintenance season because of work that was deferred to take advantage of last year’s price surge, as well as unplanned outages at multiple refineries because of issues ranging from a deadly fire to a severe winter storm. The seasonal increase in gasoline stockpiles during the winter demand lull of the past few month also failed to lift inventories from depressed levels, and they’re now at their lowest for this point in the year in more than a decade, government data show.