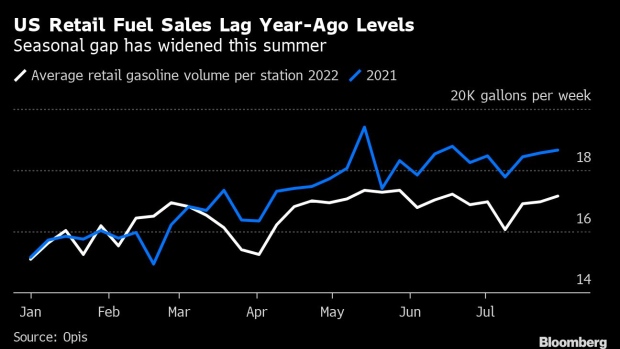 A driver returns a fuel nozzle to a gas pump at a Chevron gas station in San Francisco, California, U.S., on Monday, March 7, 2022. The average price of gasoline in the U.S. jumped above $4 a gallon for the first time since 2008 in a clear sign of the energy inflation that's hurt consumers since Russia invaded Ukraine. Photographer: Bloomberg/Bloomberg , Photographer: Bloomberg/Bloomberg

(Bloomberg) -- Gas stations in the US are selling plenty of fuel, even as government data shows a steep drop in wholesale gasoline demand.

The amount of retail gasoline sold in the second half of July rose 3.6% from the first half, according to Opis, which collects data at about 35,000 stations across the country. That’s in line with figures from GasBuddy, which models sales from 150,000 stations and saw consumer demand hit a year-to-date high in the week ended July 24.

While those estimates seem to run counter to official government data showing implied demand in July falling below summer 2020 levels -- all of these measures agree on one thing: Demand is much lower now that it was last year.

Station owners are selling around 8-9% less gasoline than they did in July 2021, according to Opis. That’s consistent with the year-over-year drop in the four-week average of product supplied, which is the Energy Information Administration’s proxy for demand.

The downward trend is being driven by decades-high inflation that has hiked costs and shrunk household budgets for everything from fuel to food. Though pump prices have hit a five-month low after eight straight weeks of declines, they are still nearly 30% higher than the same time last year, according to auto club AAA.

At times like this, fuel retailers tend to go “hand to mouth” and buy just what they need, said Denton Cinquegrana, chief oil analyst at Opis.

That could help explain the disparity between the government’s implied demand data -- which is based on how much fuel leaves primary storage sites -- and the retail demand data -- which shows how much consumers are buying. The former caused a furor last week, with many puzzling over how consumption could have fallen so dramatically.