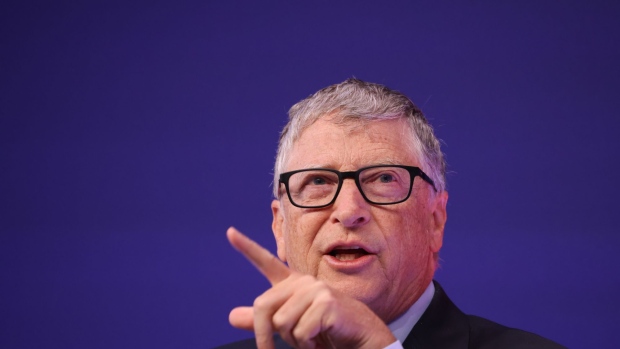 Bill Gates, co-chairman of the Bill and Melinda Gates Foundation, during the Global Investment Summit (GIS) 2021 at the Science Museum in London, U.K., on Tuesday, Oct. 19, 2021. U.K. Prime Minister Boris Johnson is hosting the summit, where as many as 200 CEOs and investors are expected to gather. , Bloomberg

(Bloomberg) -- Philanthropist Bill Gates and Jeremy Farrar, director of the U.K.’s Wellcome foundation, called for caution in predicting the path of the coronavirus as their organizations committed a combined $300 million to help prepare for emerging variants and future pandemic threats.

“Talk of the pandemic coming to an end or waking up one Tuesday morning and it’s finished, that is premature,” Farrar said. “We’ve got to prepare for other scenarios which may not be quite as rosy.”

While the U.K. and some other countries have probably turned the corner in the fight against omicron thanks to vaccines, much of the world remains unprotected, and new variants continue to pose a risk, Farrar told reporters Tuesday on a call. Rising levels of immunity could reduce the impact of omicron and future variants, but forecasting the course of the pandemic remains perilous, Gates said.

“We did not predict something as transmissible as omicron, so we have to be modest in our ability to predict the future,” he said on the call.

Wellcome and the Bill & Melinda Gates Foundation announced the new funding for the Coalition for Epidemic Preparedness Innovations, which has supported the development of Covid-19 vaccines. The head of CEPI, Richard Hatchett, also said that it’s too early to declare the end of the acute phase of the pandemic. The Oslo-based group was set up five years ago, after the Ebola crisis, with backing from a handful of governments, Gates and Wellcome.

Officials in some countries have expressed hope that omicron’s rapid spread and less severe outcomes will mark a turning point in the pandemic. However, Anthony Fauci, U.S. President Joe Biden’s top medical adviser, and other health experts have said it’s too soon to say whether omicron could signal the start of Covid’s shift to becoming a persistent, endemic illness, like the flu.

“As much as we hope omicron will represent a transition, it’s really too early,” Hatchett said. “There’s no guarantee that we’re always going to trend toward less severe disease.”

CEPI is working to spur development of vaccines that address variants of SARS-CoV-2, as well as shots that could offer broad protection against multiple coronaviruses. The group’s $3.5 billion strategy calls for creating a library of prototype vaccines and other weapons to combat potential threats from about two dozen viral families and envisions a future in which new vaccines against infectious disease could be created within 100 days.