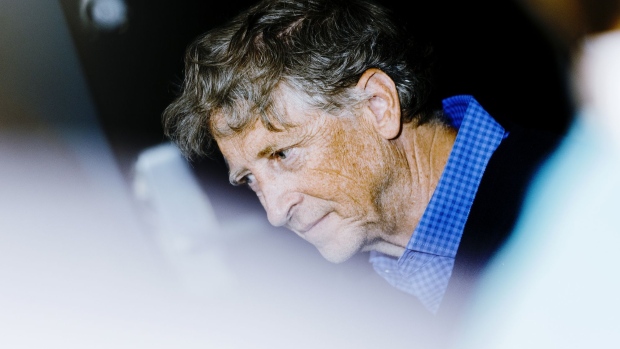 Luxury furnishings sit inside the cabin of a Lineage 1000 jet, manufacture by Embraer SA, at the Diamond Hanger, London Stansted Airport in Stansted, U.K., on Thursday, July 9, 2020. With jet fares running about 20% lower than average thanks to sharp dips in business travel demand and a host of other factors, switching from first class to private has become a more reasonable investment in health and safety. Photographer: Luke MacGregor/Bloomberg , Bloomberg

(Bloomberg) -- The coronavirus crisis hasn’t stopped the world’s wealthy from flying -- they’re just increasingly doing it privately, and some are getting outsized returns from it.

Bill Gates, Nassef Sawiris, James Packer and Kerry Stokes have accumulated more than $1.2 billion in the world’s largest operator of private-jet bases, according to data compiled by Bloomberg. The company, Signature Aviation Plc, has recently become the focus of a takeover fight involving Blackstone Group Inc., Carlyle Group Inc. and Global Infrastructure Partners, helping its shares almost triple since a low in mid-March.

Private flying is one of the few travel categories to have held up during the Covid-19 pandemic, offering the well-heeled the opportunity to jet off while minimizing potentially risky contact with other passengers. As global airline passenger traffic has plunged, private-jet activity has fared better and was at about the same level in the first three weeks of January as at the start of 2020, despite a resurgence of the virus, according to research from aviation data and consultancy company WingX.

“Some clients only flew commercial before the pandemic, but Covid-19 has changed all of that,” said Michael S. Harris, director of family office at Verdence Capital Advisors, which oversees about $2.5 billion. “The way we travel may now have changed forever.”

Gates, who’s become Signature’s biggest shareholder after surfacing as an investor in the company in 2009, boosted his stake four times between July and August. Sawiris, Egypt’s wealthiest person according to the Bloomberg Billionaires Index, has more than doubled his holding in the past year to 7.4%, becoming the company’s third-largest owner. Investment firms of casino billionaire Packer and media mogul Stokes appeared last month as beneficiaries of a trust managed by 2B Investments (Australia) Holdings Pty, which emerged as a shareholder when the pandemic was gaining strength last year in March.

The recent takeover fight has been a big lift to the shares, taking Signature’s market value to 3.5 billion pounds ($4.8 billion). After the company received Blackstone’s approach -- backed by Gates -- Carlyle said it was considering making a bid and has until Feb. 4 to formalize its interest. GIP rejoined the contest Jan. 11 with a $4.6 billion buyout that Signature agreed to, though it added it would consider other proposals. Both Blackstone and Gates, who have teamed up, as well as Carlyle could still trump GIP with higher offers.

The 16% stake that Gates owns directly through his holding company, Cascade Investment LLC, is now worth about $780 million, while his family’s charitable foundation controls an extra 2.7% valued at almost $150 million, filings show. Sawiris’s NNS owns about $350 million after accumulating additional shares in Signature last month, increasing his bet on a bidding war and the private-jet industry.

2B Investments, meantime, has sold shares in Signature since January for more than $100 million, data compiled by Bloomberg show. The firm previously built a 3.85% stake on behalf of investors including Crown Resorts Ltd.’s Packer and Stokes, the chairman of conglomerate Seven Group Holdings Ltd., filings indicate. At one point, that holding was worth nearly $200 million.