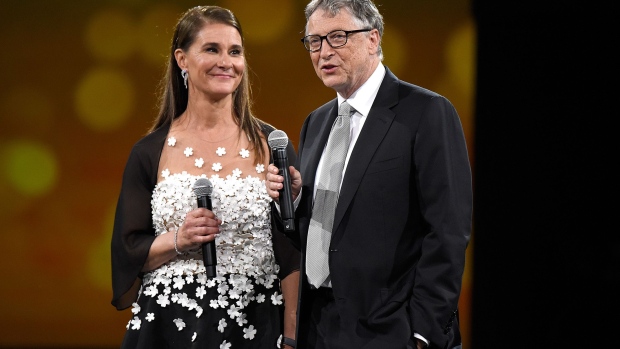 It started with a safari in Africa.

A young Bill and Melinda Gates, riding in the back of a truck, were on the continent for the first time in 1993 -- there to see animals, nature and discuss their priorities as a soon-to-be married couple. But what they saw sparked a broader conversation about the enormous fortune they’d already begun to amass.

“It was our first sustained look at extreme poverty,” Melinda said in a speech in Abu Dhabi in 2016. It was “the beginning of our education about the challenges facing the world’s poorest people.”

It was also the beginning of the Bill and Melinda Gates Foundation, the philanthropic behemoth the couple built over the course of their 27-year marriage, which ended this week. In their note announcing the split, they said they would continue running the foundation together.

Despite this assurance, news of the divorce sent a shock wave through the world of philanthropy.

A commitment to giving

In 2010, the Gateses, now worth about US$145 billion, signed the Giving Pledge, a promise they co-created for the world’s richest people to donate the majority of their wealth in their lifetime or will. They committed “the vast majority of our assets to the Bill & Melinda Gates Foundation.” It remains to be seen how that money will be distributed in the wake of their split.

The pledge is in no way legally binding, and Bill and Melinda have already explored other ways of giving back, tackling climate change and gender inequality, respectively, through their own investment firms. Their individual giving could expand now that there are two ultra-high-net worth households instead of one, said Elizabeth Dale, associate professor of nonprofit leadership at Seattle University.

The Bill and Melinda Gates Foundation is no ordinary family philanthropy; it’s the largest of its kind on the planet. With more than 1,600 employees and offices around the world, it has a US$50 billion endowment, and has already distributed more than US$50 billion since its inception to causes like vaccine development and women’s empowerment. It rivals large countries in its support, contributing more resources to research and development to combat malaria, tuberculosis and other diseases.

It also has its ties to Wall Street.

The foundation trust distributes tens of millions of dollars in fees every year to investment managers and financial services firms. Some of the biggest recipients disclosed in the trust’s most recent tax return included Marathon Asset Management, Wright Management, State Street Corporation and Green Court Capital Management, who all received more than US$7 million in fees.

Any change to Bill or Melinda’s involvement in the foundation would have a big impact because of its unusual board size. Bill and Melinda make up two-thirds of the foundation’s trustees. The third member is their friend Warren Buffett, who has added more than US$27 billion of his own money to the foundation’s coffers over the past 15 years.

The Ford Foundation, which is roughly a fifth the size of the Gates Foundation, has 15 members on its board. The Rockefeller Foundation, at a 10th of the size, has no fewer than 12 at any time. And unlike those organizations, its living donors can influence its priorities and operations, said Greg Witkowski, a senior lecturer of nonprofit management at Columbia University.

Dale and Witkowski agree the split won’t immediately impact the foundation or the grants that have already been promised, but it could impact its future depending on how the couple’s approach to philanthropy evolves as they separate.

Greg Ratliff, who worked at the Gates Foundation for 10 years and is now senior vice president of Rockefeller Philanthropy Advisors, said their work was family-driven, meaning they only took on causes that Bill and Melinda were interested in. They each brought very different approaches to the work, he added.

“It was sort of head and heart, and Melinda brought the heart and the personal component,” said Ratliff, who worked on education and education technology projects at the foundation. He remembers how Bill would gravitate toward whatever technology or tools they were implementing in the schools, and Melinda would look to the impact their work had on the students and teachers.

Dale said the fact that they have their own separate interests means their individual giving outside of the foundation could pick up.

That’s what happened following Jeff Bezos and MacKenzie Scott’s divorce in 2019. As a couple, they weren’t big philanthropists, especially relative to their US$137 billion net worth at the time. Shortly after their split, Scott received a quarter of the former couple’s Amazon.com Inc. stake, worth about US$38 billion then. She signed the Giving Pledge and in 2020 went on a philanthropic tear, giving away almost US$6 billion to hundreds of small organizations in a matter of months.

In other small coincidences, the Gates announcement of a split came in the form of a Twitter message, signed “Melinda Gates and Bill Gates,” a departure from the “Bill and Melinda” on pretty much everything else the couple signs. And like Scott, Melinda has prominently embraced her maiden name since they announced the split, going by Melinda French Gates.

The two women have worked together on shared causes, including the Equality Can’t Wait Challenge in 2020, a US$30 million award to organizations that come up with ways to advance women’s power by 2030.

In 2015, Melinda started Pivotal Ventures, an investment and incubation company, “as a separate, independent organization” from the foundation to focus on solving issues impacting women and families. Bill also has his own side projects, like Breakthrough Energy Ventures, a fund that fights climate change by investing in green startups.

How the Gates fortune is split could determine which causes get more attention. Their complicated holdings have already begun untangling, with more than US$2 billion transferred to Melinda this week alone. The bulk of it is from about 14.1 million shares in Canadian National Railway Co.

For now, the foundation is projecting an image of calm.

Carla Sandine, spokesperson for PATH, a global health non-profit and major grantee of the Gates Foundation, said they’ve heard the same thing as everyone else: nothing is going to change.

“I think we have to trust that,” said Sandine. PATH, based in Seattle, has received more than US$2.2 billion from the Gates Foundation.

The fact that the divorce of two people has caused so much anxiety and uncertainty in the nonprofit world highlights the problems with the modern philanthropy model, said Erica Foldy, associate professor of public and nonprofit management at New York University’s Wagner Graduate School of Public Service.

“What a few individuals decide to do has a massive impact on the health and well-being of millions or even billions of people,” Foldy said.

Sandine agrees that it’s frustrating that the world depends on the generosity of individuals to solve its problems.

“I think the fact that we would even talk about the future of global public health hinging on the relationship between individuals, I think it’s reflective of a larger problem,” Sandine said. “Public health around the world is not properly funded, so Bill and Melinda Gates have been filling massive gaps.”