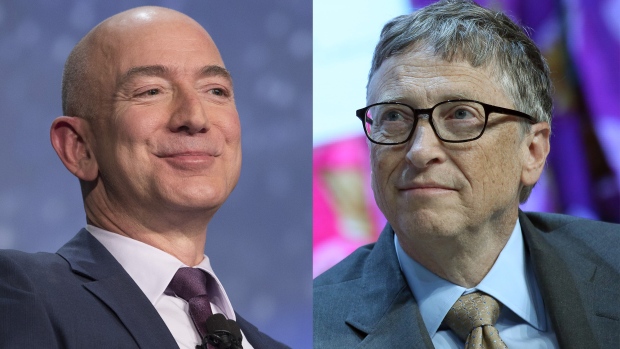 Bill Gates, billionaire and co-chair of the Bill and Melinda Gates Foundation, reacts during a panel session on the opening day of the World Economic Forum (WEF) in Davos, Switzerland, on Tuesday, Jan. 22, 2019. World leaders, influential executives, bankers and policy makers attend the 49th annual meeting of the World Economic Forum in Davos from Jan. 22 - 25. Photographer: Jason Alden/Bloomberg , Bloomberg

Bloomberg tracks the fortunes of some 2,800 billionaires. Of those, 145 are worth at least US$10 billion, making them decabillionaires. Now, the world contains two centibillionaires simultaneously.

Microsoft Corp. co-founder Bill Gates, once the world’s richest person, has again eclipsed the US$100 billion threshold, joining Amazon.com Inc.’s Jeff Bezos in the exclusive club, according to the Bloomberg Billionaires Index.

Gates’s fortune, now US$100 billion on the nose, hasn’t reached such heights since the dot-com boom, when Bezos was only beginning his march up the world’s wealth rankings. The Amazon founder is now worth US$145.6 billion, having added US$20.7 billion this year alone, while Gates has gained US$9.5 billion in 2018.

These two fortunes underscore a widening wealth gap in the U.S., where those with the most capital are accumulating riches the fastest. It’s also a worldwide trend. France’s Bernard Arnault has an US$86.2 billion fortune, equal to about 3 per cent of his country’s economy. The net worth of Spain’s Amancio Ortega represents 5 per cent of that nation’s gross domestic product. And then there’s Bidzina Ivanishvili, whose worth about a third of Georgia’s GDP.

The Gates and Bezos mega-fortunes may not last long. Gates has donated more than US$35 billion to the Bill & Melinda Gates Foundation and said he intends to give away at least half of his wealth. Bezos, meanwhile, may be about to cede some of his fortune for a different reason: he and his wife Mackenzie are divorcing.