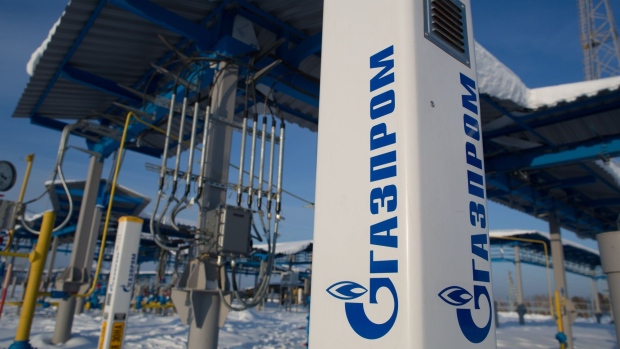 A worker turns a wheel to adjust a valve in the yard at the Gazprom PJSC Atamanskaya compressor station, part of the Power Of Siberia gas pipeline, near Svobodny, in the Amur region, Russia, on Wednesday, Dec. 11, 2019. The pipeline, which runs from Russia’s enormous reserves in eastern Siberia and will eventually be 3,000 kilometers (1,900 miles) long, will help satisfy China’s vast and expanding energy needs. Photographer: Andrey Rudakov/Bloomberg , Bloomberg

(Bloomberg) -- The holders of two series of Gazprom PJSC notes face delays with coupon payments as Citigroup Inc., the securities’ paying agent, checks the transactions are compliant with sanctions, according to people familiar with the matter.

While the Russian company has wired the money due last week, the paying agent is taking extra care on its due diligence process, the people said, asking not to be identified discussing private information. The Russian gas giant was due to pay interest of $15 million in June 29, and 7.7 million Swiss francs ($8 million) a day after, data compiled by Bloomberg show.

As of around mid-day in London on July 5, the holders of the dollar and franc notes with overdue interest had not received the money into their accounts, according to other people familiar with the matter. Both notes have a 14 business day grace period, according to their terms.

A Citigroup spokesperson declined to comment, while a representative for Gazprom didn’t reply to a request for comment.

Since Russia invaded Ukraine on Feb. 24, the state-controlled gas giant has made interest payments due under seven of its outstanding bonds, while also repaying investors $1.3 billion of notes at maturity, according to data compiled by Bloomberg.

Gazprom is sanctioned by the US, but not by the European Union or the UK as that would complicate gas imports from Russia. Europe -- Germany in particular -- faces a grim economic outlook as soaring energy prices hit industrial output and add to surging inflation.