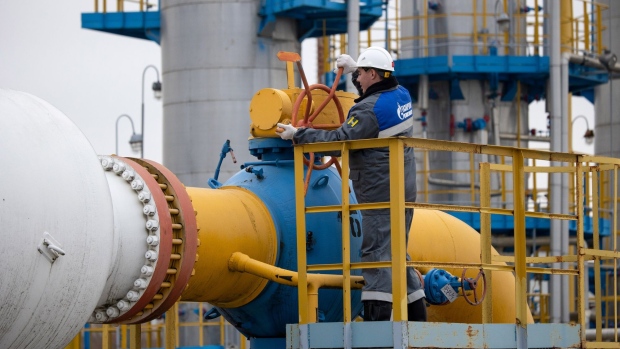 A worker turns a valve wheel at the Kasimovskoye underground gas storage facility, operated by Gazprom PJSC, in Kasimov, Russia, on Wednesday, Nov. 17, 2021. Russia signaled it has little appetite for increasing the natural gas it transits through other territories to Europe as the winter heating season gets underway. , Bloomberg

The producer benefited from a surge in gas prices as Europe, its largest export market, faced a severe energy deficit due to post-Covid recovery allied to stockpiles at multi-year lows. While Gazprom met its delivery obligations, gas flows to the continent were capped as it prioritized re-stocking domestic inventories.

“The price situation combined with our thoroughly elaborated supply policies have made this year one of the most successful for Gazprom Group,” Deputy Chief Executive Officer Famil Sadygov said in an interview with the in-house publication at the end of December.

The market may look past last year’s records as current gas flows are in the limelight amid Russia’s tensions with West over its invasion of Ukraine. Last month President Vladimir Putin demanded gas should be paid for in rubles -- via a complicated mechanism involving setting up two linked bank accounts to handle the foreign exchange transaction.

Earlier this week Gazprom halted deliveries to Poland and Bulgaria and will keep the flows turned off until the two countries agree to Moscow’s demand to pay for the fuel in rubles. Russia will halt gas supplies to other buyers who don’t pay in rubles as payments come due, in line with the presidential decree, according to Kremlin spokesman Dmitry Peskov.

In the December interview, Sadygov said the company is on track to pay dividends for 2021 of more than 45 rubles a share. That would be nearly three times the previous record set in 2018.

However, Western sanctions on Russia, following its invasion, have already made a number of Russian companies, including steelmakers Severstal PJSC and NLMK PJSC, and gold miner Polymetal International Plc, to delay or cease payouts. State oil producer Zarubezhneft OAO asked the government to exempt the company from paying dividends for 2021, Interfax reported, citing a source with knowledge.

The finance ministry said that it would consider the dividend case of each state-owned company separately. “State-owned companies are more likely to pay dividends in order to replenish the budget,” Andrey Lobazov and Maria Fedorova, analysts at Aton, said in a research note April 15. “With over 50% controlled by the government, Gazprom’s dividends form a key contribution to the state budget.” Aton estimated Gazprom’s probability to pay dividends as moderate.