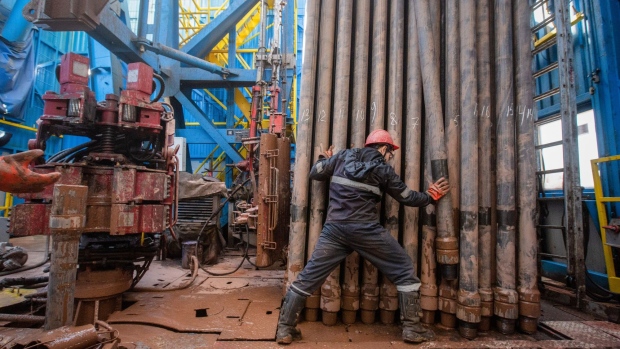 A worker moves drilling pipes at the Gazprom PJSC gas drilling rig in the Kovyktinskoye gas field, part of the Power of Siberia gas pipeline project, near Irkutsk, Russia, on Wednesday, April 7, 2021. Built by Russian energy giant Gazprom PJSC, the pipeline runs about 3,000 kilometers (1,864 miles) from the Chayandinskoye and Kovyktinskoye gas fields in the coldest part of Siberia to Blagoveshchensk, near the Chinese border. Photographer: Andrey Rudakov/Bloomberg , Bloomberg

(Bloomberg) -- Gazprom PJSC rejected accusations that it has been withholding natural gas supplies from Europe as the region battles its worst energy crunch in decades.

Data on Gazprom’s production and exports to Europe and Turkey prove that “it’s absurd” to accuse the state-run company of under-supplying the region, Sergey Komlev, head of contract structuring at Gazprom Export, said in an in-house magazine on Friday.

Flows from Russia’s gas giant, the biggest supplier of the fuel in Europe, have been under scrutiny from lawmakers as regional prices smashed records due to below-normal inventory levels and tight supplies. Gazprom has capped flows to Europe despite the price surge, saying it needs to refill depleted domestic storage.

Gazprom’s exports outside the former USSR, mainly to Europe and Turkey, rose 17% in the first eight and half months of the year compared with the same period in 2020, to a near-record level of 138.6 billion cubic meters, Komlev said. Germany and Turkey, Gazprom’s top customers, saw the biggest absolute increase in supplies.

That compares favorably with exports from most other main suppliers of gas to Europe, either by pipeline or as seaborne cargoes of super-chilled liquid fuel. Those volumes fell sharply in the first half of the year, according to Gazprom Export.

Gazprom is currently producing the most gas in more than a decade for this time of year, but the additional output is staying at home to refill storage. Only after October will the company be able to boost flows to Europe, according to analysts.

Late Thursday, Gazprom announced that it’s preparing its Urengoy field, one of the largest in West Siberia, for peak production in the upcoming winter season.  “It’s Gazprom’s task No. 1 to guarantee a successful autumn-winter period, to be a reliable supplier of gas to domestic and foreign consumers during the increased, peak, demand,” Chief Executive Officer Alexey Miller said in a statement.