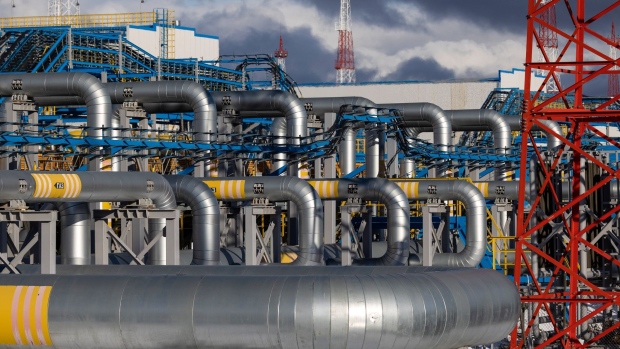 Gas pipes at the Comprehensive Gas Treatment Unit No.3 at the Gazprom PJSC Chayandinskoye oil, gas and condensate field, a resource base for the Power of Siberia gas pipeline, in the Lensk district of the Sakha Republic, Russia, on Monday, Oct. 11, 2021. Amid record daily swings of as much as 40% in European gas prices, Russian President Vladimir Putin made a calculated intervention to cool the market last week by saying Gazprom can boost supplies to help ease shortages. Photographer: Andrey Rudakov/Bloomberg , Bloomberg

(Bloomberg) -- Russian gas giant Gazprom PJSC maintained its established outlook for the company’s 2021 gas deliveries to Europe and Turkey even as the continent struggles to secure more of the fuel before the winter.

“We still stick to the estimates, under which Gazprom’s gas supplies to Europe and Turkey by the end of the year may reach as much as 183 billion cubic meters,” Gazprom Deputy Chief Executive Officer Elena Burmistrova said in an interview with an in-house publication. That is in line with the outlook the Russian gas producer gave in April, some months before the energy crisis took hold.

European gas-market watchers are following Gazprom’s export plans closely as Russia is the main potential source of extra gas for the continent this winter. So far, Russia hasn’t sent any significant additional volumes to the spot market, citing the need to prioritize filling domestic storage. With Europe’s inventories at their lowest seasonal level in at least a decade, regional benchmark gas prices jumped to records earlier this month.

Gazprom sees 2021 Russian gas deliveries to Turkey at 24 billion to 25 billion cubic meters, Burmistrova said. Should that outlook -- a modest advance on where exports stood in September -- materialize, then the producer’s shipments to western and central Europe this year could reach about 158 billion cubic meters.

That would be roughly in line with Gazprom’s European deliveries last year, when the regional energy demand was lower amid coronavirus lockdowns, and markedly below the 2018 record of 176.8 billion cubic meters, according to the producer’s data based on reports under Russian accounting standards.

Gazprom has on several occasions said it is fulfilling all supply requests from its European clients, an assertion confirmed by several major buyers of Russian gas in the region. Russia is ready to deliver extra volumes to the continent, but needs additional requests from its customers, President Vladimir Putin said earlier this month.

Putin has also said that extra supplies via the controversial Nord Stream 2 pipeline could make a significant dent in Europe’s gas shortfall, once it gets regulatory approval.

Burmistrova declined to estimate how much spot gas Gazprom will offer on its electronic sales platform this year. As of September, sales with delivery dates this year reached about 7.4 billion cubic meters.

Spots sales from Gazprom’s electronic platform could help ease the European energy crunch, Deputy Prime Minister Alexander Novak told Putin earlier this month. While such sales should be considered, they “should not be detrimental” to Russia’s consumers given winter demand, Putin responded.

Novak did not rule out Gazprom increasing spot sales once the producer completes reinjections into domestic gas storage sites by Nov. 1. As of end of the last week, Gazprom was still carrying out the reinjection campaign, according to the company.