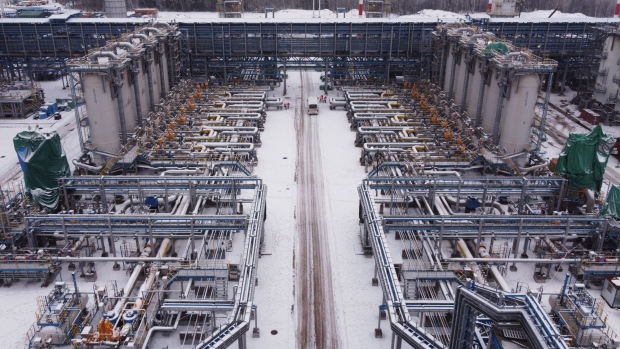 Absorber columns either side of a snow-covered access road at the Gazprom PJSC Slavyanskaya compressor station, the starting point of the Nord Stream 2 gas pipeline, in Ust-Luga, Russia, on Thursday, Jan. 28, 2021. Nord Stream 2 is a 1,230-kilometer (764-mile) gas pipeline that will double the capacity of the existing undersea route from Russian fields to Europe -- the original Nord Stream -- which opened in 2011. , Bloomberg

(Bloomberg) -- Gazprom PJSC will stop delivering natural gas to Europe through its main pipeline for three days, further squeezing energy supplies just as Germany is trying to build up stocks for the winter.

European benchmark futures soared as much as 9% after the Russian producer said it won’t ship any gas to Germany via the Nord Stream pipeline from Aug. 31 through Sept. 2 because of maintenance. The work will involve the only functioning turbine that can pump gas into the link.

The European gas market has been on edge for months as Russia progressively cut deliveries through the pipeline, most recently to just 20% of capacity. Gazprom has cited issues with turbines, but European politicians insist the curbs are politically motivated as Russia retaliates against sanctions imposed after it invaded Ukraine.

The shutdown will occur just as Germany rushes to fill storage sites to at least 95% capacity by November. That still may not guarantee there will be enough gas for the winter if Russia cuts off supply, Germany’s energy regulator said. Russia also limits deliveries to Europe via Ukraine.

While turning off Nord Stream for three days is a serious blow to already fragile markets, it could have been worse.

The maintenance, which is brief and not being done in the middle of peak heating demand, shows that the lone turbine is being kept up and may continue functioning for the time being. Back in July, the pipeline was shut for 10 days for annual maintenance, and many feared supplies wouldn’t resume at all.

Gazprom’s statement “will be treated with a massive pinch of salt by the market, as concerns will be rife that the pipe does not return to service either on time, or at all,” said Tom Marzec-Manser, head of gas analytics at ICIS in London. “The announcement late on Friday will likely support gas prices yet further still when markets reopen on Monday.”

European gas prices posted the longest run of weekly gains this year Friday, intensifying the pain for industries and households, and threatening to push economies into recession.

The upcoming maintenance will be carried out with Siemens Energy, which made the turbines and has service contracts with Gazprom, according to the statement.

“Upon completion of the work and the absence of technical malfunctions of the unit, gas transport will be restored to the level of 33 million cubic meters per day,” Gazprom said.

That equals the 20% of capacity in effect now. The pipeline can carry about 167 million cubic meters per day.

The Portovaya compressor station in Russia, where the pipeline begins, is designed to operate six major and two smaller turbines. One turbine is stranded in Germany after maintenance in Canada, while others still in Russia need repairs either in Canada or at the site.