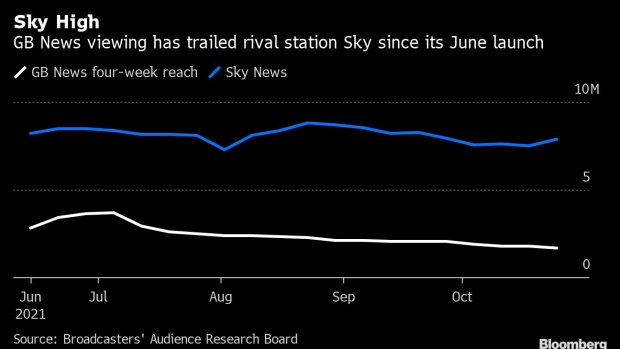 (Bloomberg) -- Conservative-leaning British television startup GB News is mulling exporting its broadcasting model to other markets provided it can shore up its domestic product, according to people familiar with the matter.

GB News launched in June with a mission to offer an alternative to what its backers described as a liberal consensus at rivals like the British Broadcasting Corp. Its debut was beset with difficulties including poor broadcast quality and on-air gaffes. The station has tried to turn things around by re-vamping its schedule, hiring new faces like former U.K. Independence Party leader Nigel Farage, and recently launching a marketing campaign.

Executives led by former Sky News Australia boss Angelos Frangopoulos are now focused on building an audience to rival that of Comcast Corp.’s Sky News, said the people, who asked not to be named because the discussions are private. They must also contend with the launch next year of talkTV by Rupert Murdoch’s News Corp., which will include a show from controversial journalist Piers Morgan.

If they can overcome these issues down the line, parent company All Perspectives Ltd. is looking at how to push into countries including Germany, Italy, Spain and Poland, according to the people. That could be done with joint ventures melding its low-cost, cloud-based newsroom technology with presentation handled by local media groups, the people said. Possible partners discussed included German media conglomerate Axel Springer, they added.

Any expansion is not imminent, and a move abroad may not happen, said the people. Spokeswomen for GB News and Axel Springer declined to comment on the plans.