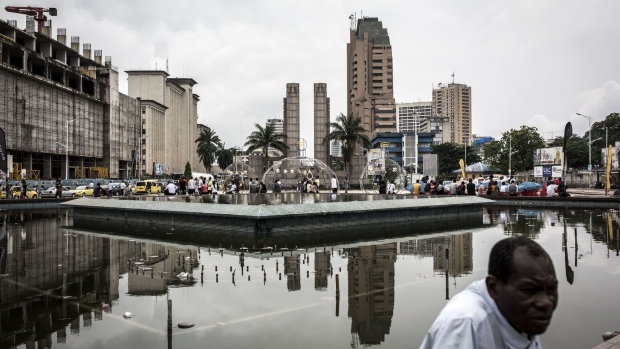 People sit around a disused fountain in the business district of Kinshasa, Democratic Republic of the Congo, on Friday, Jan. 11, 2019. , Bloomberg

(Bloomberg) -- General Electric Co. and the Democratic Republic of Congo signed a preliminary accord to develop several energy and health projects.

The two parties signed a memorandum of understanding on the projects on Wednesday in the Congolese capital, Kinshasa.The deals could be worth about $1.8 billion, according to two people with direct knowledge of the talks.

GE South Africa Ltd. and Congo are discussing about $1 billion worth of hydropower projects that would add about 1,000 megawatts of power to Congo’s grid over the next three years, the people said, asking not to be identified because the information isn’t public. Discussions are also being held on about $800 million of health-related infrastructure investments, they said.

The deal may include a possible rehabilitation of turbines on the Inga I and II hydropower plants that would return about 650 mw of power to the grid, the people said.

To contact the reporter on this story: Michael J. Kavanagh in Kinshasa at mkavanagh9@bloomberg.net

To contact the editors responsible for this story: Benjamin Harvey at bharvey11@bloomberg.net, ;John McCorry at jmccorry@bloomberg.net, Paul Richardson, Liezel Hill