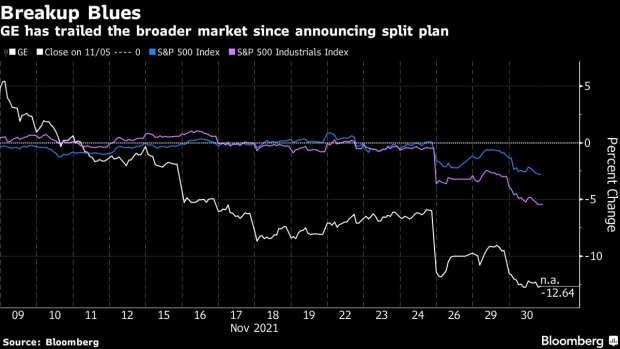 (Bloomberg) -- General Electric Co.’s decision to unshackle its core industrial businesses by splitting itself into three separate companies hasn’t done much for investors. Far from it.

Shares of the maker of jet engines, power equipment and medical scanners fell 3.5% Tuesday, resulting in a 12% slide since Chief Executive Officer Larry Culp made the surprise announcement about the split three weeks ago. That has wiped out about $15 billion in market value.

The swoon has vastly outpaced a 2.9% drop in the broader S&P 500 index over the same period and a 5.8% decline in an index of industrial peers. Investors have registered concerns about the spread of the newly discovered omicron coronavirus variant and the fallout from another wave of government-imposed travel restrictions.

GE says it isn’t fazed by the market’s cold shoulder.

“Our focus is on executing the plan we laid out to realize the full potential of our businesses, while we continue to reduce debt, improve our operational performance, and strategically deploy capital to drive sustainable, profitable growth,” a company spokesperson said by email.

The slump for GE comes despite a largely positive reception from most Wall Street analysts to the three-year breakup. Several research firms boosted price targets in the wake of the Nov. 9 announcement, lifting the average to roughly $123 from about $121 before the announcement, according to Bloomberg data.

“Investors in GE will have to wait a long time (over a year) to potentially realize the full value of the transactions,” Deutsche Bank analyst Nicole DeBlase wrote in a note shortly after GE’s decision.

The sharp decline in GE shares stands out from several past industrial breakups, which have often seen little stock movement between the unveiling of major separation plans and their completion. Of 19 industrial spinoffs since the 1990s, the median, one-month stock swing amounted to just a 1% decline, DeBlase said in a June research note.

GE is on track to undershoot that trend significantly, barring a sharp reversal, something at least one sell-side analyst says is unlikely. Other analysts still see more value in GE than is reflected in its current stock price.

Here’s a snapshot of what some analysts have said about GE’s breakup in recent weeks:

Analyst Markus Mittermaier raised his 12-month price target to $143 from $136 after GE announced the plans to split.

“What we view as one of the most significant turnarounds in corporate history from a highly levered financial tinderbox to a set of three independently run, focused companies remains under-appreciated by the market, in our view,” he said in a Nov. 18 note.

GE’s plan to spin off its health-care division, its combined power-related businesses and continue with its jet-engine division by 2024 “makes a ton of sense and will create shareholder value both near-term and long-term,” analyst Scott Davis said in Nov. 9 note.

“No reason for stock to trade at a discount” to the sum of its parts, which he calculated at $134 a share. Davis has a $127 price target.

Analyst Deane Dray on Nov. 9 praised the breakup plan and said GE was undertaking it “from a position of strength.” He lifted his 12-month price target to $130 from $127.

“We remain bullish on shares and like how GE is positioned at this point in the cycle to benefit from the nascent rebound in commercial aero,” he said.

“Bottom line, prior attempts at portfolio ‘value creation’ have fallen victim to weak underlying details versus the historically positive narrative under the GE umbrella. Most spins tread water between announcement and consummation, but a flat stock is the best case to us -- even the Bull math is less than 10% upside,” he said in a Nov. 10 note.

He stuck to his neutral rating and $55 target for GE shares, the lowest among GE analysts tracked by Bloomberg.

Analyst Saree Boroditsky initiated coverage with a $100 price target for GE shares after the breakup was announced, saying potential upside was already baked into its current valuation. She cited a number of headwinds facing GE, such as how the global push to eliminate carbon emissions could limit long-term earnings potential at GE’s gas-power business, a risk investors under-appreciate today, she wrote Nov. 22.

“GE is a transformational story with a new pathway towards simplification as the company looks to split by 2024. That said, we believe this announcement is the last positive catalyst from these efforts, and investors should refocus on business fundamentals,” she said.