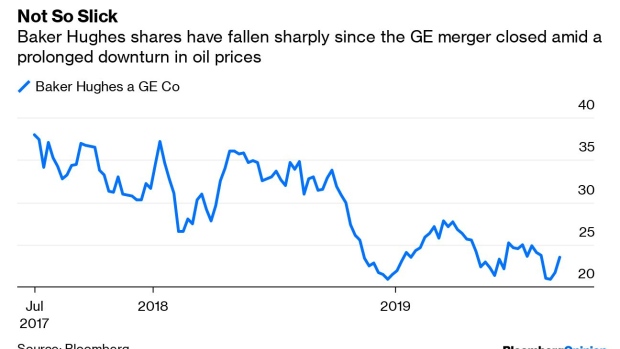 (Bloomberg Opinion) -- At least one writedown is coming when General Electric Co. reports its third-quarter earnings results next month.

The struggling industrial giant is selling off another chunk of its stake in Baker Hughes as CEO Larry Culp scrounges up more cash to fund his turnaround strategy. GE will offer 105 million class A shares in a secondary offering (the underwriters have the option to purchase up to an additional 15.75 million), while Baker Hughes will buy back $250 million worth of class B stock, according to an announcement after the close of trading on Tuesday.

Collectively, the actions will reduce GE’s stake in the entity formed by the 2017 merger of its oil and gas unit with Baker Hughes to less than 50%. That will force GE to give up most of its board seats at Baker Hughes. More importantly, the company will now have to deconsolidate Baker Hughes’s results from its own earnings and recognize the difference between what it paid for the deal and what the asset is currently worth.

Looking at Baker Hughes’s share price since the deal closed, you don’t need a calculator to know this isn’t going to go in GE’s favor. In July, GE estimated it would have to take a $7.4 billion charge based on a Baker Hughes share price at the time of about $24.84. The shares closed on Tuesday at $24.11 and then dropped about 4% in after-market trading.

On the one hand, this looming charge was well-telegraphed by GE after it began unwinding its stake in Baker Hughes in late 2018 and was likely already priced into its current stock price. GE shares barely budged in late trading. Taking the hit now removes one of the talking points that was employed by Bernie Madoff whistle-blower Harry Markopolos in his sweeping criticism of the company last month. Among other things, he contended that GE was keeping its stake in Baker Hughes above 50% for no other reason than to avoid taking another writedown.

Markopolos has an agreement with an undisclosed hedge fund that will reward him with a share of the profits from bets that GE shares will decline. The company has called his claims “meritless” and Culp deemed it “market manipulation.” His claims on GE’s treatment of its Baker Hughes stake always struck me as excessive given GE’s disclosures on the potential for a writedown and clear delineation of the impact of Baker Hughes’s results on its numbers. Tuesday’s stake sale announcement should put the issue to bed.

On the other hand, the crux of Markopolos’s report focused on the alleged need for GE to prop up its long-term care insurance business with an immediate $18.5 billion cash injection and to take a $10.5 billion non-cash GAAP charge in the next few years because of tougher accounting rules. Those numbers seem overly dire, but it’s likely that the decline in interest rates will force GE to ratchet down its assumptions for the potential returns it can generate on investments to offset claims costs. That could result in a meaningful charge against its earnings as soon as this quarter when GE conducts its annual loss-recognition testing. This would pose a threat to the already thin equity levels at the company’s GE Capital financing arm.That looming risk makes every penny count at GE. Some investors and analysts had questioned why Culp wasn't moving more aggressively on selling down the Baker Hughes stake. But there's a cost to urgency.

GE said in March that it expected to net an additional $12 billion from the continuing divestiture of its Baker Hughes stake. Back then, the stock was hovering in the range of $27 to $28. Tuesday’s closing price of $24.11 suggests this latest divestiture plan should yield about $3.2 billion, or around $400 million lower than would have been implied if the March valuations had held. That’s hardly a game changer for the company, and it still has a fair amount of shares left to sell that could make up the difference. But the fact that GE is selling its stake at these prices signals the company doesn’t expect much of a rebound anytime soon and that it can’t afford to wait around for one.