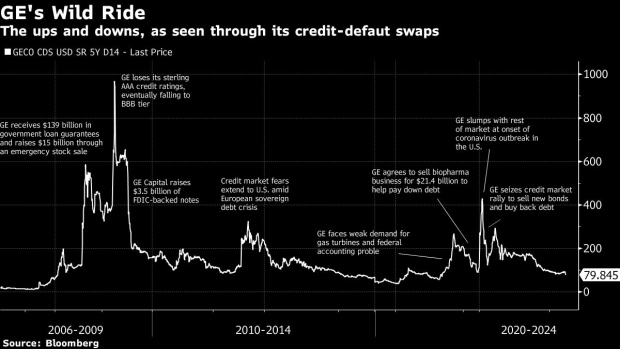 (Bloomberg) -- Before the global financial crisis, General Electric Co. and its finance unit were AAA rated darlings of corporate bond investors, who gobbled up tens of billions of dollars in debt offerings each year. That allowed the conglomerate to access cheap capital and build a financing behemoth that rivaled some of Wall Street’s largest banks.

With the $30 billion sale of its jet-leasing business Wednesday, General Electric is shaking off one of the last remaining vestiges of GE Capital, folding what’s left into its broader corporate balance sheet and marking an inauspicious end for what was once one of the biggest players in the investment-grade bond universe.

At their peak in 2006, General Electric and GE Capital issued over $60 billion of bonds, more than even Wall Street mainstays like Bank of America Corp. and JPMorgan Chase & Co., according to data compiled by Bloomberg.

When the U.S. housing market collapsed in 2008 and pushed Lehman Brothers Holdings Inc. into bankruptcy, General Electric’s standing quickly unraveled as worries emerged that it too would be toppled. The company lost its AAA rating in 2009, and tougher capital rules for large financial institutions suddenly became an albatross -- along with its massively underfunded pension -- that began a slow descent to the edge of junk.

General Electric is still far from out of the woods, market watchers say, and S&P Global Ratings put the firm’s BBB+ rating on watch for a downgrade Wednesday. But analysts also note the deal should ultimately help improve the risk outlook for a company that’s gone to great lengths to shed the remnants of the financial giant that nearly brought it down.

“Once, AAA rated GE was the corporate yield-curve benchmark, as they had liquid bonds at virtually every maturity,” Gregory Staples, head of fixed income for DWS North America, said via email. “It reminds me how radically the corporate landscape can change over time. GE has matured more bonds than most companies will ever issue.”

General Electric will receive $24 billion in cash plus a 46% equity stake in the combined entity after the sale of GE Capital Aviation Services to rival AerCap Holdings NV, according to a statement Wednesday.

It plans to use proceeds of the sale to cut debt by about $30 billion by the time the deal closes in about 9-12 months, for an expected total reduction of more than $70 billion since the end of 2018.

Since taking over in 2018, Culp has shed assets to slim down the unwieldy conglomerate, giving the stock a boost after hundreds of billions of dollars in market value were wiped away. He oversaw the company’s sale of its biopharma business to Danaher Corp. in 2019 for a total consideration of $21.4 billion to help pay down debt, as well as a pension freeze to shave billions of dollars off its shortfall.

The company also remains dogged by past missteps.

In early 2018, about six months after Culp predecessor John Flannery took over from Jeffrey Immelt, GE disclosed a $6.2 billion charge related to an insurance portfolio of long-term care policies and said it would pay $15 billion over seven years to fill a shortfall in reserves.

“From an immediate impact on leverage perspective, we don’t necessarily see this as a big deleveraging move by GE, and the insurance liabilities do remain as a reminder of past sins,” Jesse Rosenthal, head of U.S. financials at research firm CreditSights, said referring to Wednesday’s sale.

While General Electric continues to periodically tap the U.S. high-grade bond market, including for $6 billion at the parent level last April, it’s a far cry from what it once was.

“This deal is basically the end of an era,” said David Knutson, head of credit research for the Americas at Schroder Investment Management. “GE’s financial division was like a virus that overtook the entire company so when the global financial crisis hit, it wasn’t really an industrial company.”