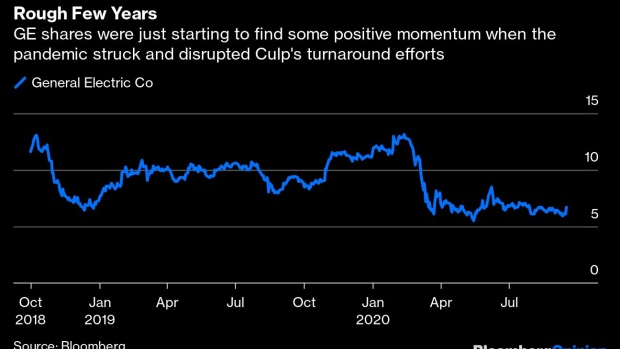 (Bloomberg Opinion) -- In his nearly two full years as General Electric Co.’s chief executive officer, Larry Culp has made a habit of setting the bar low enough (some might say basement level) that he can still find ways to surprise investors with what at least feels like good news as he tries to steer the lumbering industrial giant toward a recovery. That pattern played out again on Wednesday when Culp, speaking at a virtual Morgan Stanley confidence, said that GE would generate positive free cash flow in the second half of 2020.

As I noted back in July, it made sense that this might be the case, given the typical back-end weighting of GE’s cash-flow performance and the company’s aggressive cost cuts in response to the coronavirus pandemic. GE had just gone through “only” $2.1 billion of cash in the three months ended in June, compared with an earlier forecast for at least $3.5 billion of cash burn and maybe as much as $4.5 billion. But try as they might — and believe me, they tried — analysts on the company’s July earnings call just couldn’t get Culp to commit to a positive cash-flow number in the second half. He would only say that there would likely be an “improvement.” That reticence is a big reason why GE shares sold off more than 4% on earnings day.

In the current environment, it’s hard to blame Culp for being conservative. Everything we thought we knew about our day-to-day lives has been turned completely upside down by the coronavirus pandemic. This is especially true for the aviation division that drives the bulk of GE’s cash flow. Whereas other CEOs in the industry have put a target on when airline travel will get back to normal, Culp has held off, wary of the false precision implied by these forecasts in such an uncertain time. Instead, he’s preferred to focus on things that he can control, like cost cuts.

If the GE of the past artfully managed earnings to fit expectations, the GE of Culp’s era appears more inclined to artfully manage expectations to fit earnings. And if you are going to go down one of those paths, under-promising and then over-delivering is the preferable of the two. While Culp acknowledged that aircraft departures had been moving “sideways” amid spikes in coronavirus cases across the U.S and Europe, things have marginally improved since July. The cash-generating health care division is also benefiting as patients start coming back into hospitals for scans and procedures, Culp said.

The problem I have is that in the intervening weeks between the second-quarter earnings call and Wednesday’s presentation, the GE board lowered another bar, this time with respect to Culp’s compensation. GE announced in mid-August that it was amending Culp’s employment agreement and extending his contract out to at least 2024, with an option for an extension to 2025. This was positioned as an endorsement of Culp as a leader of the company, but it read like an acknowledgment that GE’s near-term prospects had been significantly dulled.

The new terms allow Culp to receive a $230 million one-time equity award if he can get GE’s stock to hover around $16.68 during any consecutive 30-day period. That compares to an average stock price in the post-earnings interval of about $6.40, leaving a big gap to overcome — but the previous terms of Culp’s contract required him to boost the stock price to around $31 to get that equity award. If the stock only claws its way back to about $10, Culp can still walk away with an equity award worth $46.5 million. On Wednesday, GE shares had their biggest rally in four months on Culp’s free-cash-flow guidance.

Something doesn’t quite add up here. Is GE’s recovery story still intact? Culp’s comments on Wednesday would seem to indicate that’s the case; he reiterated a call for positive free cash flow in 2021 as well as a longer-term goal for high-single-digit free-cash-flow yields. The timeline has clearly been pushed out somewhat by the pandemic. But the idea that $17 or even $10 is an aspirational stock price for 2025 would seem to indicate a much more dire and drawn-out scenario. The thing about lowered bars is if you start to have too many of them, it can send some very mixed signals.