General Electric Co. soared to a 15-month high after the company said cash from its manufacturing operations are likely to rise in 2020, buoying Chief Executive Officer Larry Culp’s effort to rescue the iconic maker of jet engines and power equipment.

Industrial free cash flow, a closely watched indicator of earnings potential, is projected to climb to as much as $4 billion this year from $2.32 billion in 2019, GE said in an earnings statement Wednesday. Wall Street had been expecting $2.2 billion for this year.

GE had a “very strong close to the year on cash,” Culp said in an interview. The improvement in the numbers and in factories “gives me a lot of encouragement relative to ’20.”

The results underscored Culp’s slow-and-steady approach to rebuilding GE’s balance sheet and restoring the company’s battered reputation. Slumping cash flow had been at the heart of GE’s recent downturn, one of the worst in its 128-year history. 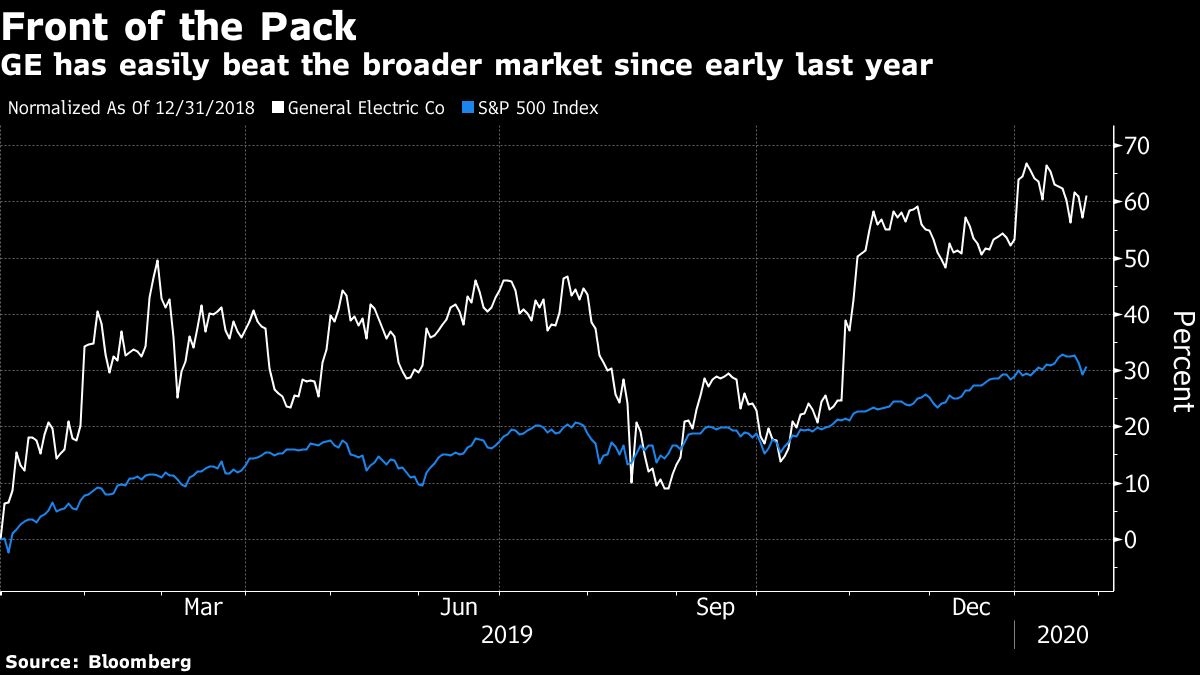 The shares jumped 9.9 per cent to US$12.89 at 11:11 a.m. in New York after climbing to US$13, their highest intraday since October 2018, the month Culp became CEO. GE soared 53 per cent last year, far outpacing the 29 per cent rise in the S&P Index. Still, that was only enough to recover a portion of GE’s collapse in the previous two years, which wiped out more than US$200 billion in shareholder value.

GE generated US$3.9 billion in fourth-quarter free cash flow from its industrial business. The 2019 annual figure of US$2.32 billion topped GE’s forecast as well as the US$1.3 billion expected by analysts. Early last year, GE predicted burning as much as US$2 billion, before raising the forecast several times.

“FCF is the most important metric to judge GE’s progress on its multiyear turnaround,” Deane Dray, an analyst at RBC Capital Markets, said in a client note. The initial cash forecast topping expectations “should be considered an upside surprise.”

The Boston-based company’s fourth-quarter profit beat expectations. Adjusted earnings rose to 21 cents a share, above the 17-cent average of estimates compiled by Bloomberg. Sales fell one per cent to US$26.2 billion, while Wall Street anticipated US$25.3 billion.

The results were bolstered by the aviation unit, which logged a 5.7 per cent rise in sales and a 22 per cent increase in orders despite grappling with challenges from Boeing Co.’s 737 Max crisis. GE Aviation, through a joint venture with France’s Safran SA, makes the engines for the plane, which was grounded in March after two deadly crashes.

After production of the narrow-body jet was halted this month, GE said it was anticipating a return in mid-2020, in line with Boeing’s forecast. GE expects to sharply trim deliveries of Max engines this year.

“There are far more moving pieces this year than we had last year” regarding the Boeing aircraft, Culp said. He said the grounding was one of the biggest variables affecting this year’s cash flow.

Quarterly orders tumbled 30 per cent in the power-equipment unit, which has been struggling for several years amid a global market slump. Sales were essentially flat. Still, Culp said there are “signs of stability” in the operation, including improvement in the service business and in cash performance.

While fixing GE Power has been a top priority since Culp took the helm at GE, the CEO said he would turn his attention more toward fixing the ailing renewable-energy unit. Fourth-quarter orders fell 11% in that business, which posted a loss of almost $200 million.

Offering its first look at 2020 expectations, GE predicted adjusted earnings of 50 cents to 60 cents a share, while analysts have predicted 67 cents. Organic sales for the manufacturing business will grow in the “low-single-digit range,” GE said.