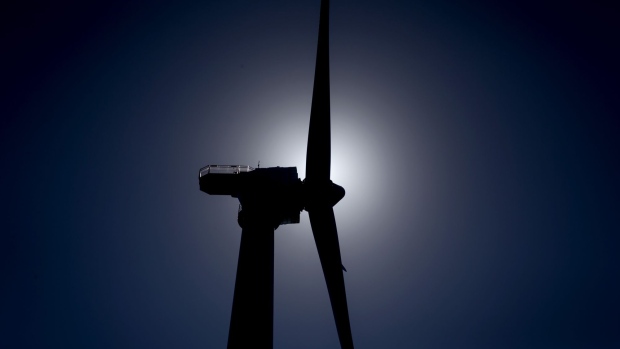 The silhouette of a GE-Alstom wind turbine is seen standing in the water off Block Island, Rhode Island, U.S., on Wednesday, Sept. 14, 2016. The installation of five 6-megawatt offshore-wind turbines at the Block Island project gives turbine supplier GE-Alstom first-mover advantage in the U.S. over its rivals Siemens and MHI-Vestas. Photographer: Eric Thayer/Bloomberg , Bloomberg

(Bloomberg) -- General Electric Co. won a partial victory its bid to use a U.S. trade agency to hobble Siemens Gamesa Renewable Energy SA’s wind business in the U.S. for the next year.

Siemens Gamesa infringes a GE patent that expires in May 2023 for a way to keep wind turbines connected to the grid during low-voltage events, the U.S. International Trade Commission said in a notice posted on its website Tuesday.

The commission ordered an import ban on certain full-converter wind turbine components with older software until the patent expires. The ban takes effect in 60 days unless it’s vetoed by the Biden administration on public policy grounds.

The ruling wasn’t a total victory for GE. The commission said that some of Siemens Gamesa’s turbines, including ones with later versions of software, didn’t infringe the patent and so can continue to be imported.

Siemens Gamesa had warned that a victory for GE would have a “profound” impact on the wind turbine market. While maintaining that it wasn’t using the specific technique covered by the patent, Siemens Gamesa also sought a broad range of exemptions, including repair parts and turbines that had already been ordered but not yet installed.

Otherwise, it “would cripple the operators’ ability to supply power to U.S. consumers and deprive these operators of their ability to recoup billions of dollars in investments in the equipment,” Siemens Gamesa told the agency in a Dec. 7 filing.

GE, in a Dec. 14 filing, called that “unfounded hyperbole.” It said Siemens Gamesa had “ample time to transition away” from the patent and “could have avoided the foreseeable situation it now charges is unfair but instead chose to continue infringing.”

The patent covers a technology known as “low voltage ride through,” which enables wind turbines to remain connected to the grid without damage during voltage fluctuations, such as those caused by short circuits or lightning strikes. The turbines would otherwise disconnect from the grid.

Boston-based General Electric has succeed in wrangling royalties on the patent from its other rivals. Vestas Wind Systems A/S and Mitsubishi Heavy Industries Ltd. earlier agreed to pay after being sued by GE.

Gamesa had a license when it was a stand-alone company but that deal didn’t cover its merger with Siemens AG’s wind unit. GE terminated the license effective July 2020. Gamesa even backed an import ban against Mitsubishi in an earlier dispute over the same patent, GE said.

The governors of Kansas and Iowa wrote near-identical letters to the commission, asking the agency to “keep in mind the importance of American jobs, facilitating competition to minimize impacts to Americans and the security of domestically produced energy.”

A similarly-worded letter was sent by the two Republican senators from Iowa -- Joni Ernst, who voted against President Joe Biden’s $550 billion infrastructure plan that includes money for clean energy, and Chuck Grassley, who voted in favor of it.

Gamesa, a Spanish-German firm based in Zamudio, Spain, had already ducked what could have been a far worse outcome for the company. The commission had already affirmed the judge’s decision to invalidate a second GE patent, related to protecting the turbine during zero-voltage events, that could have meant an import ban through 2027.