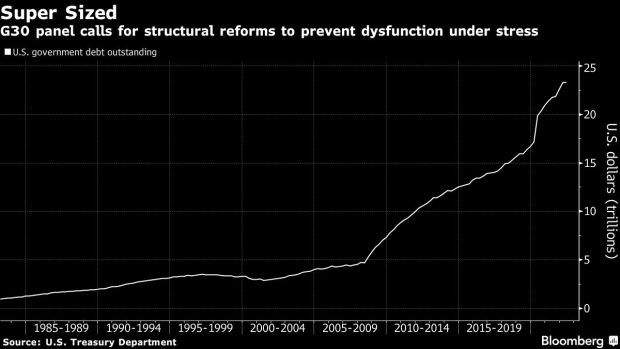 (Bloomberg) -- A panel led by former Treasury Secretary Timothy Geithner leveled criticism at the Federal Reserve in a call for regulators to strengthen moves to address the risk of trading breakdowns in the $23 trillion US Treasuries market.

“The Treasury market is the most important financial market in the world,” Geithner said in a briefing Thursday on a report by the panel that updated a push for reforms issued last year. “The Treasury market has long since outgrown its regulatory framework.”

The working group -- under the aegis of the Group of 30, an independent association fronted by prominent former officials -- reiterated 10 key recommendations it first made a year ago to address the risk of meltdowns in Treasuries trading such as that seen in March 2020. It went on to stress action that was most imperative for regulators to now focus on.

“Although notable progress has been made on some issues, much more remains to be done” by US authorities, the panel wrote.

Adding to the urgency for reforms is the Fed’s current monetary-tightening campaign, Geithner told the Wall Street Journal in an interview ahead of the panel. Along with interest-rate hikes, the campaign includes the Fed draining reserves from the banking system as it scales down its Treasuries holdings.

“The case for moving on these fronts is very strong -- stronger now, in part, because of the monetary-policy transition and the balance-sheet transition that is under way,” Geithner told the paper. “There’s maybe less risk that things break in some way and they have to back off” from their campaign if the resiliency of the Treasury market is improved, he said, according to the Journal.

The Fed last year implemented one of the Geithner panel’s calls -- introducing a permanent standing repurchase facility to provide a liquidity backstop to the Treasuries market. But the panel criticized the Fed for not making the SRF, as it’s known, accessible to a broader array of financial institutions. Instead, only primary dealers and banks are allowed to use it.

“By limiting access to these types of active market participants, the Federal Reserve misses an opportunity to diversify the supply of Treasury market liquidity under stress,” the report said.

The panel also faulted the Fed for failing to follow up on promises to address the supplementary leverage ratio, or SLR, which forces banks to hold reserves against their Treasuries holdings. The SLR is a “binding regulatory constraint on the allocation of capital by most of the banks whose dealer subsidiaries are the largest providers of liquidity to the Treasury markets,” it said.

“With the continued growth of marketable Treasury debt and central bank holdings of Treasuries continuing to decline, the lack of action on the SLR is especially concerning,” the panel said.

There are various alternatives to address leverage concerns without imposing a binding constraint on banks in providing liquidity in Treasuries, which is a “relatively low risk” activity, according to the panel. These alternatives are “well understood by Federal Reserve staff,” the report said.

Meantime, the Securities and Exchange Commission -- chaired by Gary Gensler, who served at the Treasury alongside Geithner during the Clinton administration -- got a shout-out.

A key recommendation by the panel last year was expanding the role of central clearing -- which could net out trades and thereby enhance liquidity while removing counterparty credit-risk concerns. Measures to do this “may take some time,” the panel said.

But it noted that Gensler soon after last year’s report asked his staff to make recommendations on central clearing of Treasuries and Treasury repos, the panel said.

“It is too soon to tell the extent to which the SEC ultimately will take steps consistent with the G30 recommendations with respect to clearing, but it seems to be committed to addressing these complex and important issues promptly, thoroughly and methodically,” the report said.

Central clearing ought to be enforced by “regulatory mandate” if necessary, the panel said.

The Inter-Agency Working Group on Treasury Market Surveillance (IAWG) has shown a desire to make changes that align with the G30’s ideas. The IAWG in November released a progress report detailing several areas of study for reforms, including central clearing.

Another area is enhancing transparency of trading in the Treasuries market, something on which the Treasury Department is now seeking comment. The G30 panel on Thursday urged that there be at least as much public transparency of Treasuries trading as exits in corporate bonds collected through the Financial Industry Regulatory Authority bond-price reporting system known as Trace.

Sharp swings in Treasury yields over the past few months, spurred by unexpectedly high inflation readings and by the Fed’s increasingly aggressive campaign to rein in the price surge, have increased calls for improvements to the structure of the marketplace.

Liquidity shortfalls became more frequent even before the Fed began running down its Treasuries holdings in mid-June. The Treasury market “almost surely remains highly susceptible to dysfunction under stress, and potential sources of stress are forbidding,” the G30 working group said.

“The capacity of existing market makers has not grown with the Treasury market,” Geithner said. Steps taken by the Fed are “welcome” but they “represent only part of what needs to be done,” he said.