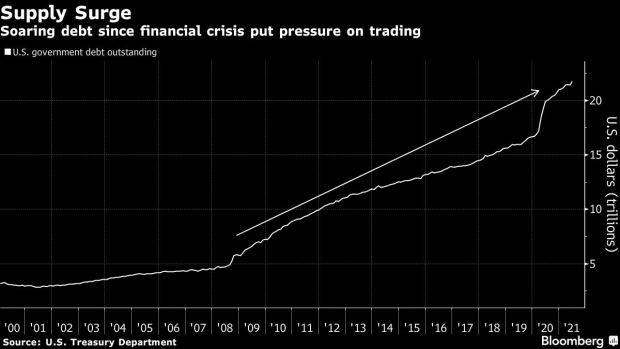 (Bloomberg) -- A panel of former top global economic policy makers on Wednesday warned that major trading disruptions in U.S. Treasuries are likely to increase unless reforms are made, adding to pressure on American regulators to fix structural issues that contributed to last year’s market meltdown.

“Confidence in the U.S. Treasury market, and its ability to function efficiently even in times of stress, is critical to the stability of the global financial system,” former Treasury Secretary Timothy Geithner, who led a blue-ribbon panel reviewing trading in U.S. government securities, said in a statement.

Geithner and colleagues including five former central bank heads released a raft of recommendations to bolster the resilience of the market for Treasuries, which seized up in March 2020 amid a desperate global rush for cash dollars. Many of the proposals reinforce similar calls made in recent months and years.

Their top proposal is the creation by the Federal Reserve of a so-called standing repo facility, a permanent mechanism for providing short-term financing to financial institutions through repurchase agreements. Fed policy makers are now discussing just such a step. Regulators should also look at altering bank-capital rules to minimize disincentives for market-making in Treasuries, the group said.

“Episodes of market dysfunction are not only likely to continue but to occur with increasing frequency” unless market-making capacity for Treasuries trading is increased or the U.S. halts the rapid build-up of its debt outstanding, the group said.

The panel, convened by the Group of 30 -- a consultative assembly of financiers, academics and former officials -- also urged that access to Fed repos be “widened substantially” beyond the designated primary dealers in U.S. debt. Fed officials have discussed also allowing banks.

The group, which includes Geithner’s fellow former Treasury Secretary Lawrence Summers, recommended an expanded role for the central clearing of Treasuries trades, which could increase transparency, reduce failed settlements and establish margin requirements that impose a uniform cap on leverage. Little more than 20% of Treasuries trading has been centrally cleared in recent years, the panel said.

“Taken as a whole, we believe our recommendations would make a meaningful contribution to improving the functioning of the Treasury market, both in normal times and in periods of crisis,” Geithner said.

QuickTake: The World’s Biggest Bond Market Needs a Revamp, Why?

Treasury Secretary Janet Yellen in March set an examination of vulnerabilities in the Treasuries market as one of three priorities for the Financial Stability Oversight Council this year. She didn’t reveal a timeline for recommended changes.

The G-30 panel’s report put the “root cause” of the episodes of disruption in Treasuries trading in recent years down to a surge in federal U.S. debt accompanied by a tighter regulatory regime for bank capital in the aftermath of the 2007-09 financial crisis.

“Capital allocated to market-making by bank-affiliated dealers has not kept pace with the very rapid growth of marketable Treasury debt outstanding,” the group’s report found. That, in turn, is due in part to leverage requirements that discourage banks from allocating capital to market making, the report said.

“Even in the unlikely event the U.S. were to dramatically change the path of fiscal policy, toward reducing the level of Treasuries outstanding relative to GDP -- which is inconceivable -- but if they were to do that, there would still be a lot of benefits of these reforms,” Geithner told reporters on a call Wednesday.

Former Fed Governor Jeremy Stein said that a standing repo facility would, for the Fed, “reduce the probability of having to step in in a more intrusive way,” as it did last year in its emergency purchases of Treasuries.

Darrell Duffie, a Stanford University finance professor who contributed to the report, said it was “definitely motivated in part by the important role of the U.S. Treasury market in supporting the reserve currency status of the dollar and, in general, financial-stability and market-transparency benefits to the entire globe.”

“All of those benefits spill back to U.S. taxpayers because they lower the cost of financing U.S. deficits. So that’s a key motivation,” Duffie said in a webinar presenting the report Wednesday.

Geithner served as chair of the working group. The project director was Patrick Parkinson, a former Fed official who’s now at the Bank Policy Institute. Parkinson co-wrote a paper last year with Nellie Liang, now the Treasury undersecretary of domestic finance, on enhancing liquidity in Treasuries. Panel members included former heads of the central banks of the U.K., Japan, Germany, Brazil and Mexico along with other ex-senior Fed officials.

(Updates with Geithner and other panel members’ comments starting after bullet-point section.)