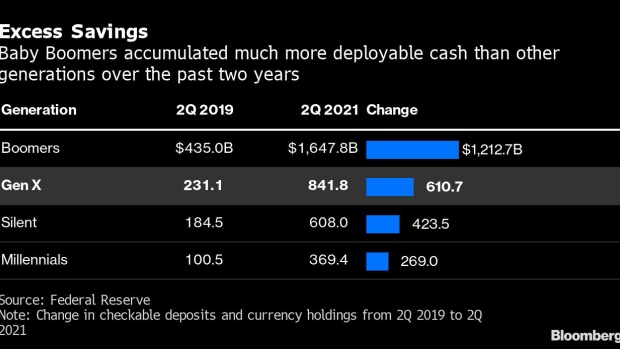 (Bloomberg) -- Generation X, the oft-overlooked demographic group squeezed between the Baby Boomers and Millennials, has experienced a wealth boom in the U.S. since Covid-19 was declared a national emergency.

During the pandemic, household wealth distribution has shifted from older generations to those who are reaching their peak earnings years, according to data from the Federal Reserve.

Gen Xers, who are age 41 to 56, saw robust gains in equities and pension entitlements, while their share of the nation’s consumer debt declined, the data show.

The Covid-19 crisis marks a rebound of sorts for the cohort that was worst-hit by the 2008 financial crisis. Millions of Gen Xers, who were in their 30s and early 40s at the time, lost jobs and housing wealth.

Their careers have since stabilized and those who could save money have invested in the stock market and 401Ks retirement accounts.

As of June this year, Generation X held 28.6% of the nation’s wealth, up 3.9 percentage points from the first quarter of 2020, according to Fed data. In dollar value, that translates into a 50% gain in their aggregate net worth -- the difference between a household’s assets and debts.

The shares held by the so-called Silent Generation, born before 1946, and the Boomers, the largest demographic group by far, declined in the same period.

Another way to grasp the Gen X wealth boom: The cohort of about 34.6 million households added $13 trillion in assets over 15 months. That’s more than the $12.8 trillion added by Boomers, a group that includes 7.7 million more households.

The Covid-19 crisis -- and the housing crunch it generated -- hit when many Gen Xers already owned a home, enabling them to capitalize on the boom. The younger Millennial generation, who are age 25 to 40, were less likely to be homeowners.

Gen Xers also benefited more than the older Boomers from a rise in pension assets. The youngest Boomers are 57 and many have retired -- meaning they are drawing down on their pensions.

In five quarters, equity assets owned by Gen X households more than doubled to $10.5 trillion, according to the Fed data. That amount is now more than 10 times the stock holdings of Millennials -- yet only about half Boomers’ equity holdings.

In term of deployable cash, too, Gen X households are still dwarfed by their elders, on aggregate. Baby Boomers have accumulated more than $1.6 trillion in excess savings in the past two years, Fed data show, more than twice as much as Gen Xers did.

That means that over the coming decades, there will be an outsized transfer of wealth from Baby Boomers to younger generations.