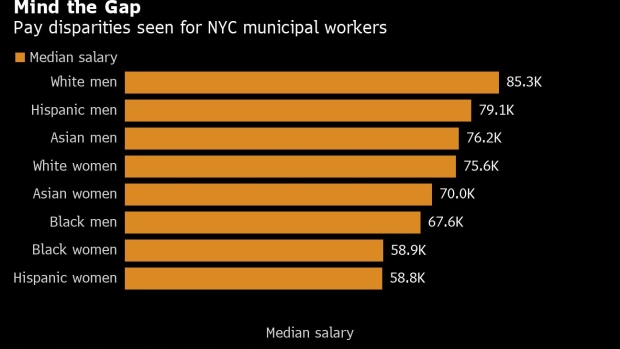 Female municipal employees make about 73 cents for every dollar paid to male workers, which is about 13 cents less than the average woman working in New York state. On average, in New York state, women make 86 cents for every dollar a man earns, one of the smaller gender pay gaps among US states nationwide. Black, Hispanic and Asian government workers also see fairly big pay gaps, the report found. Pay disparities are especially acute for Black men and women working for the city, who make 79 cents on the dollar and 69 cents on the dollar, respectively, compared with their White male coworkers, the report found.

It concluded that these pay disparities are largely the result of “occupational segregation,” or when women and people of color disproportionately work in lower-paid industries. More women work for the city as secretaries, senior police administrative assistants and public health nurses, for example.

“As the first women-majority Council, we will not rest until women — particularly women of color — are valued equally for their crucial contributions to our City,” New York City Council Speaker Adrienne Adams said.

Nationwide, women who work full-time earn around around 83% of what men do, according to US Census Bureau data, though some places and demographics do better than others. Young women, for example, out-earn men in New York City. That much bigger gaps exists among city-workers in such a progressive and diverse place raises new questions about what can be done to address them.

City Council members are recommending the city collect better data, improve hiring practices, and a reassess job titles. The group is also introducing legislation that will address the issue, too.

The pay equity report released Thursday is based on 2019 salary data across 36 city agencies. Some workers weren’t included in the analysis, most notably teachers, counselors and principals employed by the Department of Education.