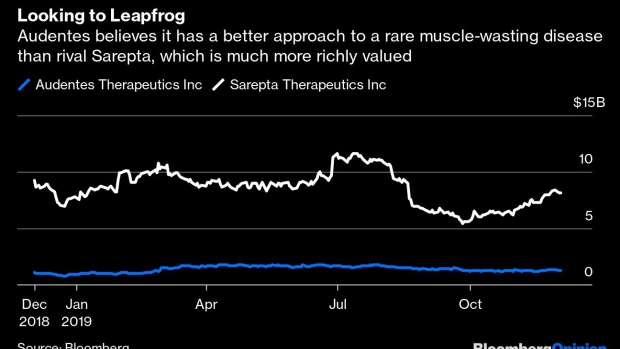 (Bloomberg Opinion) -- Gene therapies — treatments that replace faulty genetic code to fight deadly diseases — are still in their infancy. Just two have been approved in the U.S. so far. But they got a big vote of confidence after the close of U.S. trading Monday when Japanese drugmaker Astellas Pharma Inc. announced it was buying Audentes Therapeutics Inc., a Bay Area developer of gene therapies, for $3 billion.

The acquisition is a gamble for Astellas. It’s paying a substantial 110% premium over Audentes’s closing stock price on Monday, and the deal could constrain its ability to buy anything else of significance. And while there’s been a lot of progress in gene therapy — some treatments look like potential cures — no company has proved it can turn promise into sustained commercial success yet. Still, it may be worth the risk.

Audentes has a broad and intriguing pipeline, and buying the company makes Astellas an instant player in gene therapy at a price that may not look so bad in the future.

The nearest-term test of the deal will be the success of Audentes’s treatment for X-linked myotubular myopathy, a neuromuscular disease that occurs in one of every 40,000 to 50,000 male births and causes muscles to atrophy. Half of those born with the condition are likely to die within 18 months. Most who survive need ventilators and feeding tubes. The company hopes to file for U.S. approval by the middle of next year. The rarity of the condition will make for an especially tough product launch. Every patient will count, and Astellas will likely have to charge a hefty price.

Luckily, the treatment looks highly effective. The first seven patients who had been dosed no longer needed ventilators, as of August. If those results continue, Astellas will have a strong case to make for a high price. Patients with this condition require enormous amounts of medical spending; a one-time treatment that substantially reduces that could wind up being highly cost-effective and appealing. Astellas also has a global reach and much more substantial resources, which will make the tough job of finding patients and getting reimbursement for the medicine easier.

Even optimistic projections for the drug likely wouldn’t support a $3 billion buyout, however. Obtaining Audentes’s gene-therapy manufacturing capability helps, as making these drugs isn’t cheap or easy. But the real upside comes from Audentes’s earlier-stage drugs. The company has gene therapies in Pompe disease and Duchene Muscular Dystrophy (DMD) that it intends to test in clinical trials starting next year. Audentes believes its novel approach to both conditions could be more effective than those taken by a number of its competitors and has an interesting scientific rationale for those claims.

Audentes’s various novel approaches still have to prove their worth in real-world tests. They add risk, but the deal could look very smart quite quickly if they work out. Sarepta Therapeutics, for example, is worth $8 billion, based in large part on an approach to DMD that Audentes thinks it can leapfrog. Positive data from any of the company’s next wave of products would speak well to the ambitious team and R&D platform that Astellas has acquired.

No deal that doubles a target's stock price and wipes out most of an acquirer's dry powder can be called a bargain. And yet, Audentes would likely have been much more expensive had Astellas waited for the company's pipeline to mature and the field to get even hotter. When it comes to a promising new area of medicine, early is better than late.