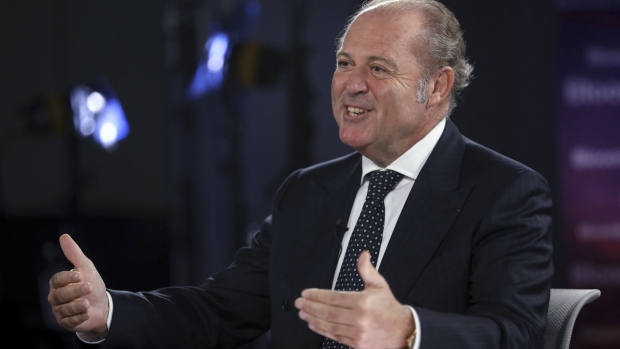 Philippe Donnet, chief executive officer of Assicurazioni Generali SpA, gestures while speaking during a Bloomberg Television interview in Milan, Italy, on Wednesday, Oct. 2, 2019. Generali will pursue both organic growth and M&A opportunities in Europe to tap the lucrative market for insurance, Donnet said in the interview. , Bloomberg

(Bloomberg) -- Assicurazioni Generali SpA Chief Executive Officer Philippe Donnet said it’s too early to speak about a possible new term before the expiration of his mandate next year.

The insurer’s board of directors is also set to expire and preparatory works for its renewal “will be submitted to the next board,” the CEO said in a Bloomberg TV interview. “My personal situation is part of this and it’s a bit early to talk about that,” he said.

Donnet, backed by Generali’s top investor Mediobanca SpA, was named to the job five years ago, replacing Mario Greco. The French native, 61, joined the firm as CEO of Generali Italy in 2013 after holding various roles at insurance companies in Italy, France and Asia.

Some of the company’s Italian investors -- including construction magnate Francesco Gaetano Caltagirone -- have been pushing for changes in the insurer’s governance, according to local media reports.

Caltagirone, who serves as Generali’s vice chairman, didn’t vote to approve 2020 results, a symbolic move underscoring his disagreements with some company executives and their backers.

As CEO, Donnet has cut costs, focused on digitalization and expanded into more lucrative product areas and higher-margin insurance to boost profitability.

Generali in November confirmed its three-year strategy and financial targets for this year, despite the pandemic effect. The company posted higher-than-expected first half profit after last year’s Covid-related impairments on investments weren’t repeated, as it benefited from higher operating income.