COVID-19 has hammered Canada’s labour market from all sides. But it’s the youngest workers who are taking the greatest hit and will pay the steepest price.

Employment for workers aged 15 to 24 dropped by 480,100 in April, or nearly 22 per cent, Statistics Canada said Friday in Ottawa. That’s a disproportionate amount since that cohort -- known as Generation Z — accounts for 12 per cent of the labour force but represented nearly a quarter of the two million jobs lost on the month. 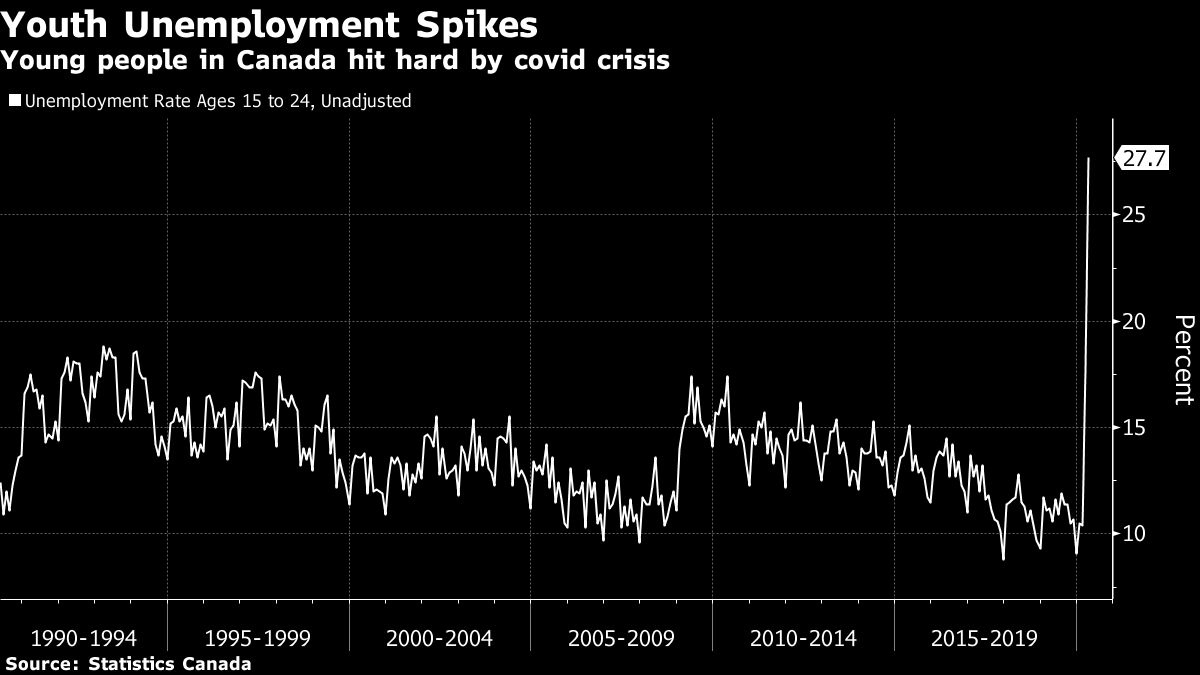 Recessions are always hard on young workers. This downturn has been particularly vicious since the halt on non-essential businesses and strict physical distancing measures have decimated the sales and services sector, where many young people work. The current crisis could also have negative impacts on their future incomes, according to Toronto-Dominion Bank.

“We’re taking the time to point this out because past recession cycles have shown that young people often bear long lasting scars on their livelihood,” TD economists Beata Caranci and James Marple said in a report Friday.

Generation Zers who are entering into the workforce now could face lower lifetime earnings compared to younger or older cohorts who graduated during better times. That’s because new entrants will have a harder time finding a job that matches their skill sets and may have to take a position with a lower skill relative to their education.

Historic data shows young people who graduate during a recession earn on average 10 per cent less than cohorts who graduated when the unemployment was lower, Caranci and Marple said. And the income gap can remain in place for a decade, which can result in longer periods of student debt and delays in buying a home and starting a family.

Prime Minister Justin Trudeau’s government has acknowledged the vulnerability of students and introduced a program to provide income support this summer.

“The idea of permanent challenges is particularly poignant for young people where we know that a summer without work experience, a summer where they’re struggling to pay their groceries or their rent is a significant setback in their march towards economic independence,” Trudeau told reporters Friday.

He added: “We will constantly be adjusting to make sure that Canadians are getting the support they need.”