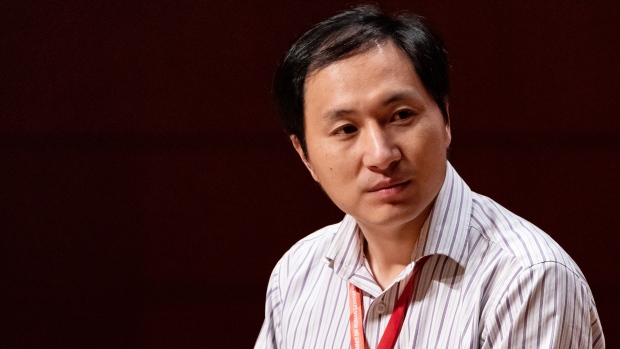 (Bloomberg) -- The genetic mutation that a Chinese researcher claimed he used on a human embryo to create HIV-resistant twins may be linked to a shorter lifespan, according to new research.

The findings from scientists at University of California Berkeley, published Monday in the journal Nature Medicine, will likely intensify criticism that the researcher carried out an experiment on humans long before the science was ready.

In November, Shenzhen-based scientist He Jiankui said he had edited the CCR5 gene of the unborn twins to create a mutation that also can occur naturally. The naturally formed mutations, relatively common among northern Europeans, protect against HIV, the virus that causes AIDS.

But a new analysis of more than 400,000 genomes and health records in the UK Biobank found that people with copies of a similar mutation from both parents had a significantly higher death rate between ages 41 and 78 than those with one or no copies. The mutation, the Berkeley researchers found, is associated with a 21% increase in mortality later in life.

“An important thing to consider is the fact that a mutation doesn’t just have one effect,’’ said Rasmus Nielsen, a UC Berkeley biologist and author of the paper. “So even though a mutation might fix one problem, it might create other problems.’’

Previous studies have shown that two mutated copies of the CCR5 gene are associated with an increase in death after a case of the flu. The research published Monday didn’t conclude why the mutation affected lifespan. Nielsen said there could be many possible explanations. The protein that the CCR5 gene codes for no longer works in people with two copies of the mutated gene, and that protein is involved in many functions in the human body.

“There both seems to be some beneficial effects of the mutation and some negative effects,’’ said Nielsen. “The question really is whether the overall effect of that mutation tends to help you or does it lead to decreased mortality.’’

He’s work has also been criticized for using the gene-editing technology known as Crispr before its effects are well understood, and for conducting his work secretively. It has drawn condemnation from the international scientific community and the Chinese government. In the U.S. and Europe, genetic editing of human embryos is mostly prohibited.

“I can’t imagine a scenario right now where Crispr editing in embryos is the best option for anything,” Nielsen said.

To contact the reporter on this story: Kristen V. Brown in San Francisco at kbrown340@bloomberg.net

To contact the editors responsible for this story: Drew Armstrong at darmstrong17@bloomberg.net, Mark Schoifet, Timothy Annett