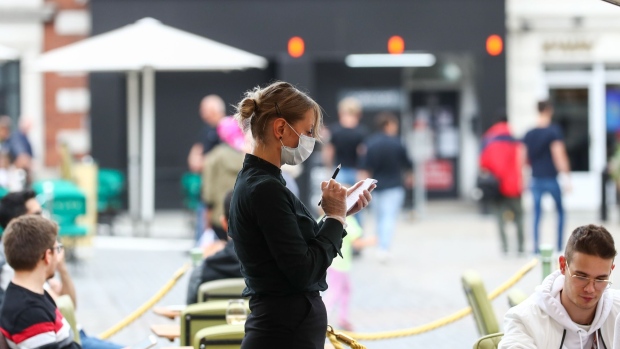 A waitress wearing a protective face mask takes a customer's order at a cafe's terrace in the Covent Garden area of London, U.K., on Saturday, July 4, 2020. Restaurants, hotels, cinemas and hairdressers will also be allowed to open their doors again on what has been dubbed 'Super Saturday' after 3 1/2 months of an economic lockdown brought in to contain the outbreak. Photographer: Simon Dawson/Bloomberg , Bloomberg

Geneva voted in favour of a minimum hourly wage of 23 francs (US$25), the latest effort in Switzerland to ensure people are able to live decently from their salary.

Nearly 58 per cent of voters in the canton, or state, backed the measure designed to “combat poverty” and “respect human dignity,” according to data published on the government’s website.

More than 300,000 people commute from France to work in the Switzerland each day, with the biggest contingent in the Lake Geneva region. The cost of living in Switzerland is high, and cross-border commuters sometimes get blamed for undercutting locals on wages.

Sunday’s vote comes six years after Switzerland decided against a national minimum wage of 22 francs. The cantons of Neuchatel and Jura also have a legal floor.