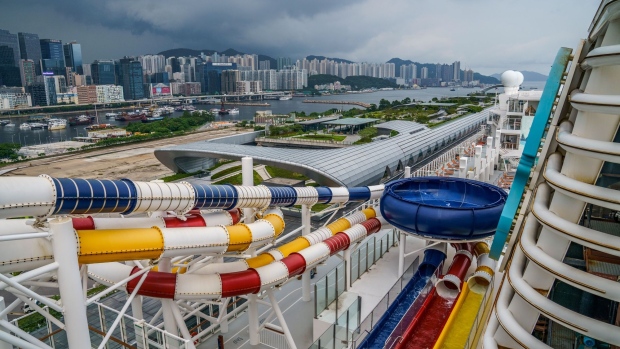 (Bloomberg) -- Genting Hong Kong Ltd., the biggest cruise operator worldwide to seek court assistance to safeguard its assets during the pandemic, is still selling tickets for its “cruises to nowhere.”

Bookings are available on Genting’s website for two-and three-night trips on its Dream Cruises from Hong Kong and Singapore through April and September, respectively. The ships head out to international waters and back, with the cheapest tickets going for HKD$1,188 ($153) or S$153 ($114) a night per person. Dream Cruises sailings that have already been scheduled will proceed, according to a company representative.

“Certain business activities of Genting Hong Kong, including but not limited to the operations of cruises by Dream Cruises, will continue in order to preserve and protect the core assets and maintain the value of the Group,” the company said in a statement Wednesday.

Cruises from Hong Kong are halted at present because of Covid-19 restrictions, but Genting is set to resume with a sailing on Feb. 4, provided government curbs are lifted as scheduled. The company confirmed that trips from Hong Kong will continue through April if pandemic restrictions are eased. Excursions for the summer season haven’t been planned, the company representative said.

Crystal Cruises, another brand operated by Genting, has suspended its Ocean and Expedition trips through April and its River cruises to the end of May, according to a statement. It is offering refunds. Vessels in operation will complete their current voyages, with one ending on Saturday in Miami, another on Jan. 30 in Aruba and a third in Ushuaia, Argentina, on Feb. 4.

“This was an extremely difficult decision but a prudent one given the current business environment and recent developments with our parent company,” Crystal Cruises President Jack Anderson said.

Genting said Wednesday it had filed with the Supreme Court of Bermuda to appoint provisional liquidators after exhausting “all reasonable efforts” to negotiate with creditors and stakeholders. The company reported a record loss of $1.7 billion in May as the pandemic ravaged the industry. Its German shipbuilding subsidiary MV Werften went into insolvency last week.

Cruise operators globally were among the first and hardest hit by Covid, which wiped out travel demand and halted sailings soon after it emerged in early 2020. Genting Hong Kong, which is majority owned by Malaysian billionaire Lim Kok Thay, warned that cross defaults could follow the collapse of MV Werften.

The company, which had about $453 million in cash and cash equivalents as of June last year, has warned it will run out of cash around the end of this month. It already halted payments to creditors totaling $3.4 billion in August 2020 and was in default of that amount at the end of that year.

The biggest cruise operators, including Carnival Corp. and Royal Caribbean Cruises Ltd., have raised enough liquidity to get through the worst of the pandemic, even if some need additional financing. A handful of smaller ones have collapsed, including Spanish cruise line Pullmantur Cruises SL and Asia’s Jalesh Cruises. Genting has the largest fleet and berth capacity among those that have stumbled financially.