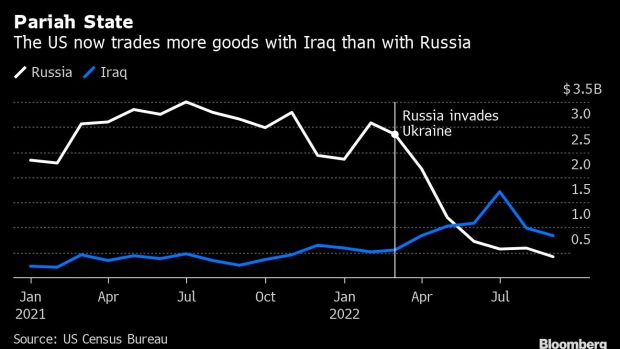 Cargo is loaded at the Port of Long Beach in Long Beach, California, US, on Thursday, Oct. 13, 2022. The head of the second-biggest US port expects the pandemic-era surge in consumer demand that snarled supply chains will start to cool, with evidence of a deceleration already reflected in weaker inbound container arrivals. Photographer: Tim Rue/Bloomberg , Bloomberg

(Bloomberg) -- Reports of the death of globalization are looking greatly exaggerated.

Yes, a US-China trade war, a global pandemic, Brexit and Russia’s war in Ukraine have rattled the once-entrenched ways that the world’s largest economies trade with each other. Such events are beginning to transform supply chains in important ways.

But trade experts also warn that it’s premature to declare the end of a world economy stitched together by cross-border commerce.

The shifting contours of the global trading system mark a kind of “reglobalization” where multinational companies are adapting their trade networks to accommodate the new economic and geopolitical challenges.

Why it matters: Supply chains could become more robust, and possibly more costly due to fewer efficiencies and geographic proximity, but more reliable under less economic pressure from strategic foes.

Here are seven ways the world’s largest trading powers are rewiring their traditional relationships -- from some marginal, perhaps temporary shifts taking place to what might be the beginnings of longer-term structural realignments:

Following Brexit, exporters in the UK experienced significant changes to their ability to trade with European Union member states. The UK Trade Policy Observatory estimates that UK exports to the EU decreased by 14% after the UK-EU Trade and Cooperation Agreement went into effect on Jan. 1, 2021. Certain sectors -- like the UK fashion industry -- were particularly hard hit by the reintroduction of tariffs, cross-border regulations and other customs formalities.

As the pandemic snarled global supply chains, US policymakers urged companies to look at ways to reinforce their supply chains and reduce American economic dependence on China and other authoritarian regimes. The Biden administration’s push toward “friend-shoring” production and manufacturing has steadily resulted in increased US trade between the US and its traditional allies in Europe.

The US remains China’s single most important export market. However, US sanctions, tariffs and export restrictions are encouraging Chinese companies to diversify their export destinations and expand access to non-US markets, particularly in the Asia-Pacific region. The creation of the 15-nation Regional Comprehensive Economic Partnership will further accelerate China’s regionalization trend in the years to come.

US sanctions and the Biden administration’s decision to revoke Russia’s most basic World Trade Organization rights have effectively severed American economic ties with Russia. As a result, Russia now trades fewer goods with the US than former American strategic foes like Iraq.

China’s goal of “reunifying” the democratically governed island of Taiwan is causing frictions with its trading partners. Lithuania became a key example in 2021 when it opened a de facto Taiwan mission in Vilnius. That provoked a backlash from Beijing and resulted in a 75% drop in Lithuanian exports to China. In recent years, the US, EU, Canada and Australia have begun to push back against China.

Following Russia’s invasion of Ukraine, Germany actually increased its imports from Russia in order to secure access to critical goods before EU export restrictions entered into force. German imports of Russian goods have now fallen by nearly 40% compared with the same period a year ago.

Washington’s concerns about China’s manufacturing capacity for semiconductors is propelling a massive shift in the way companies produce the chips needed for products ranging from cars and refrigerators to military aircraft and missiles. Over the next five years semiconductor companies will collectively spend more than $110 billion building new semiconductor fabrication plants outside of China, according to Cowen Inc.