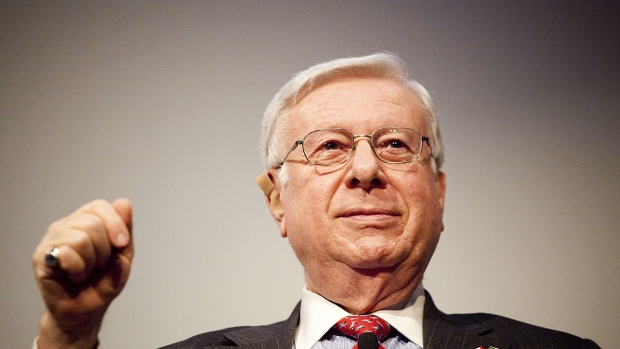 George Gero, a financial adviser known throughout the gold industry, who claimed he traded one of the first-ever gold contracts in New York, has died. He was 84.

He died on Dec. 12 at his home, according to his obituary with Levine Memorial Chapel. No cause was given.

Gero, a New York-based managing director in Royal Bank of Canada’s wealth management division, served for 54 years trading precious metals as a member of the New York Mercantile Exchange and Chicago Mercantile Exchange. He was known by colleagues as a kind person who always looked out for people, and by reporters as someone never too busy to take a call and explain the sometimes complex minutiae of the gold markets.

“He was an institution in the gold market for as long as I can remember, and every time I saw him at the Gold Dinner he was so engaged, energized and sharp,” said Tai Wong, head of metal derivatives trading at BMO Capital Markets in New York and a 15-year industry veteran. “He was still engaged and energetic as ever, and it’s always sad to see an institution pass.”

Gero was a sort-of pitch man for the gold industry, and a staple character at large industry events like the annual CME Gold Dinner -- now called the Precious Metals Dinner -- and the International Precious Metals Institute’s Platinum Dinner. Gero was especially fond of his years working as a floor trader, when trading was done in person at exchanges. He was chairman emeritus of the now-discontinued Commodity Floor Brokers & Traders Association, according to John Lothian, founder of a futures-industry newsletter.

“This was an organization he created for all the independent brokers and traders so they could get health insurance,” Lothian wrote Monday in the newsletter. “He was that kind of a guy, always looking out to help other people. He also always treated everyone the same, no matter what their station in life.”

A Jewish immigrant from Hungary during World War II, where he escaped persecution as a young child, Gero was drawn to gold trading because he said he always recognized it as a store of value. It was by trading gold and currencies that his father, a banker in Lisbon, was able to pay the money that kept him safe for two years in the basement of a Catholic Jesuit home for boys.

Anthony George Gero was born in London on May 31, 1936, to Hungarian parents Stephen and Ilona Gero, according to his obituary and a July interview with Bloomberg. The family returned to Hungary, though his father left for Portugal a day before the Germans marched into Budapest during the war, leaving him and his mother, sister and grandmother stuck in the occupied country.

“I was an enemy of the state because I had a Jewish background and was born in England,” Gero said in the interview. “I was a Holocaust survivor.”

Gold that Jewish refugees were able to smuggle out during the Holocaust was the currency that won over border guards as Gero, with his mother and sister, escaped Hungary after Soviet troops took Budapest from Nazi-German control in 1945, and later came to the U.S.

“Gold – little, tiny gold coins – saved our lives getting through borders coming out of Europe,” Gero said. “They were helpful to get out of Hungary. They were helpful with the border guards.”

Gero was quoted regularly in major financial news outlets during this year’s gold surge and during bullion’s historic rally after the 2008 financial crisis. He often times knew when media were calling, picking up the phone and saying to an unsuspecting reporter: “Hello, Maytag repair,” referring to the old washing machine customer service.

When asked how he was doing, Gero would always respond jokingly: “Can’t complain, nobody will listen.”

Mike Buscemi, who started as a commodity floor trader in 1968 and met Gero in the 1970s, said his friend was good at cutting through the bunk and giving facts that would help investors.

“If he thought it was a bad market, he’d tell you,” Buscemi said. “George would always try to convey to people he wasn’t always right, but he would give you a fair vision of what the situation is.”

CME Group Inc. Chief Executive Officer Terry Duffy said in a statement that Gero made “many significant contributions” to the exchange. John Moran, New York Complex Director at RBC Wealth Management, said in an emailed statement that Gero was “a beloved colleague in the New York midtown office” who “enriched the lives of all us fortunate enough to know him.”

Gero’s colleagues said he had a wealth of knowledge about all of Wall Street, especially given he focused so much on equities and not just commodities. The CME announced in 2015 that it would shutter its New York trading floors because open-outcry deals accounted for just 1% of futures volumes. After a members-only meeting that July about how things would be handled going forward, Gero, as always, was one of the first people to speak with media.

“When someone died, you’d have moment of silence at 11 a.m. and then when the clock hit 11:01 you’d yell and scream again, that was an indication that life continues,” Buscemi said, referring to the days when they worked on the trading floors. “We lost a stand-up guy.”

He is survived by his wife Gale, children Danielle Gero and Neil Canavan, and Mark and Dena Feinsand, the obituary said. He is also survived by grandchildren Ryan, Zack and Cassandra, and his sister, Eva Shaff.

--With assistance from Debarati Roy and Yvonne Yue Li.